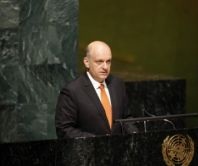 Georgia's UN Ambassador, Alexander Lomaia, says it won't be long until there is support from a majority of UN states for allowing refugees to return to their homes in Abkhazia and South Ossetia. (IPN.)

TBILISI, DFWatch – The UN General Assembly July 3 passed a resolution calling for internally displaced persons and refugees from Abkhazia and so called South Ossetia, Tskhinvali region, to be let to return home.

It was a humanitarian resolution, addressing demographic changes in the region, and calling upon the participants in the Geneva talks to facilitate the return of the IDPs to their homes.

This is the fifth consecutive year such a resolution has been passed by the UN, and this year there was an addition which requests the UN Secretary General to present an annual report on the implementation of the resolution.

There has been an increase of supporters. This year, 60 voted for and 15 against. Last year, 57 countries voted for the resolution. The resolution stresses that there is “a need to develop a schedule for the voluntary, safe, dignified and unhindered return of all internally displaced persons and refugees” who have suffered as a result of conflicts.

Though the UN General Assembly resolutions are advisory in nature and do not have any legal force it still seems to be a victory for the Georgian foreign ministry, which in a statement released soon after the decision expressed appreciation to those states that supported the resolution.

At the same time, the Deputy Permanent Representative of the Russian Federation to the UN, Alexander Pankin, stated before the voting process that the resolution will “complicate an already fragile process of the Geneva discussions.” According to the Russian delegation, Abkhazia and South Ossetia are independent countries and eventually Georgia as well as the whole world will have to accept this.

According to the Georgian ambassador to the UN, Aleksander Lomaia, the increasing number of countries that support these resolutions will finally lead to a moment when the resolution will have support from a majority of UN member states.