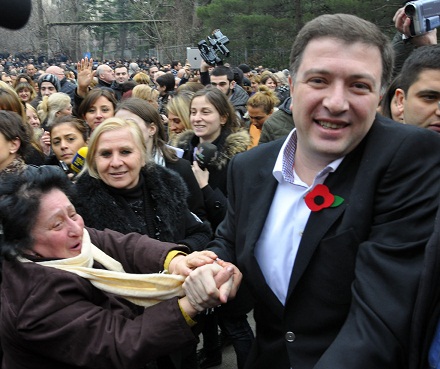 Gigi Ugulava will continue as mayor of Tbilisi until the first trial hearing. He is charged with money laundering and embezzlement. (Interpressnews.)

TBILISI, DFWatch–Tbilisi City Court did not listen to a plea from the Prosecutor’s Office to suspend Tbilisi Mayor Gigi Uglava from his position. Neither did it set bail conditions.

Monday, the court reviewed the charges against Ugulava, a member of President Saakashvili’s inner circle, of money laundering and embezzlement.The prosecutor had asked to suspend him and set a one million lari (USD 600 000) bail, but Judge Giorgi Arevadze decided not to set any punishment for the mayor before the first hearing.

Before entering the courtroom, the mayor told journalists he cannot afford to put up one million lari for bail and that the amount is ‘inadequately high.’

Now that bail is out of the question, both Ugulava and his lawyer say they think the court’s decision was logical.

“Today’s hearing revealed that the accusing party didn’t have any legal grounds to demand what they have demanded as punishment,” Ugulava said after leaving the courtroom. He added that he is ready to cooperate with the investigation and answer all questions.

The court scheduled the first pretrial hearing for April 10, 2013.