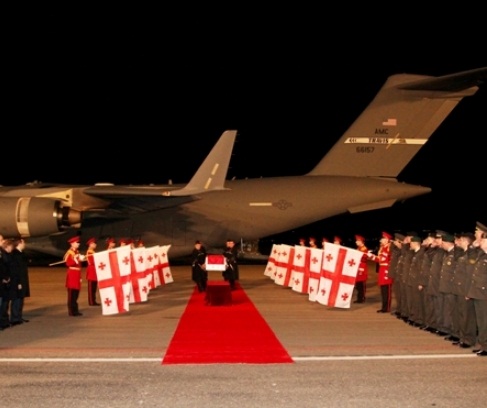 The body of Giorgi Kikadze was brought back to Georgia January 1, 2013. (Ministry of Defense.)

TBILISI, DFWatch — Martin Dempsey, Chairman of the U.S. Joint Chiefs of Staff and James G. Stavridis, Commander of the U.S.’ European Command and NATO’s Supreme Allied Commander Europe have expressed their condolences over the death of Georgian Sergeant Giorgi Kikadze, who died while participating in the ISAF mission in Afghanistan.

December 19, Sergeant Giorgi Kikadze was announced missing. He was last seen at a Georgian military base. The Defense Ministry and the Joint Staff of Georgia established a rescue team chaired by General Vakhtang Kapanadze which was sent to Afghanistan to search for the missing soldier. Ten days later, he was found dead.

Kikadze’s body was January 1 brought back to Georgia, and his funeral ceremony will be held today, Saturday.

The Defense Ministry of Georgia on Friday issued a statement according to which a telephone conversation has been arranged between the Chief of Joint Staff of GAF Colonel Irakli Dzneladze and the Chairman of the U.S. Joint Chiefs of Staff (CJCS), General Martin Dempsey.

The high-ranking military officials expressed their deepest condolences over the death of Sergeant Giorgi Kikadze who had participated in the ISAF mission, the statement reads.

They asked the Chief of JS of GAF, on behalf of the United States Army and European Command, to extend their sympathy to the family members of the deceased military serviceman.

The sides also talked about cooperation with respect to international missions.

“Gen. Martin Dempsey and Admiral James G. Stavridis outlined the contribution provided by Georgia to the international mission in Afghanistan as well as the Georgian military’s bravery and high professionalism,” the ministry informs.

Georgia is one of the largest contributors to ISAF operations. A 50 strong advance infantry platoon was sent from Georgia to the ISAF mission in 2004 in order to provide safety for the presidential elections. In 2007, Georgian doctors were sent for six months as part of a Lithuanian group of soldiers.

In April 2010, 749 Georgian military personnel were sent to carry out full spectrum operations with the support of US military. Until now, Georgian battalions have been replaced according to a rotation system. The last rotation took place in April 2012, when the 31th battalion of the third infantry brigade was replaced by the 23 battalion of the second infantry brigade, which will serve for seven months in Helmand province. 18 Georgian soldiers have lost their lives while serving in Afghanistan.

More than 1 700 Georgian soldiers have so far participates in ISAF operations. 19 of them did not return alive.