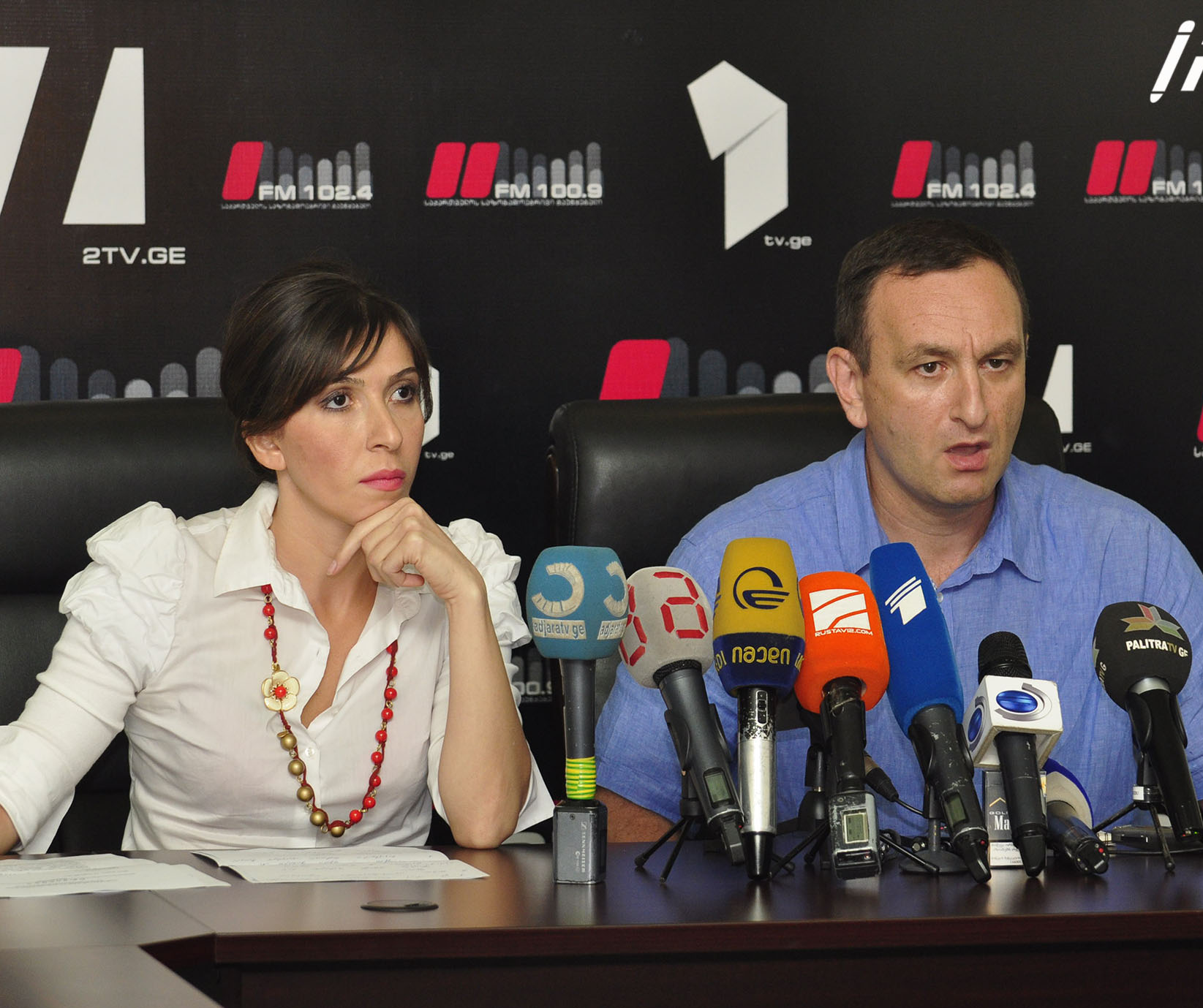 The two journalists claimed at a press conference on Wednesday that their dismissal, which they learned about the day before, was politically motivated.

“If you see former TV 9 employees on Public Broadcaster, you can be sure that the prime minister is accomplishing his plans,” Davit Paichadze said.

At the start there was an incident, as Irakli Kakabadze from the Civic Solidarity Movement and Gia Korkotashvili, a former TV host, attempted to dissolve the press conference and were forced to leave the room. 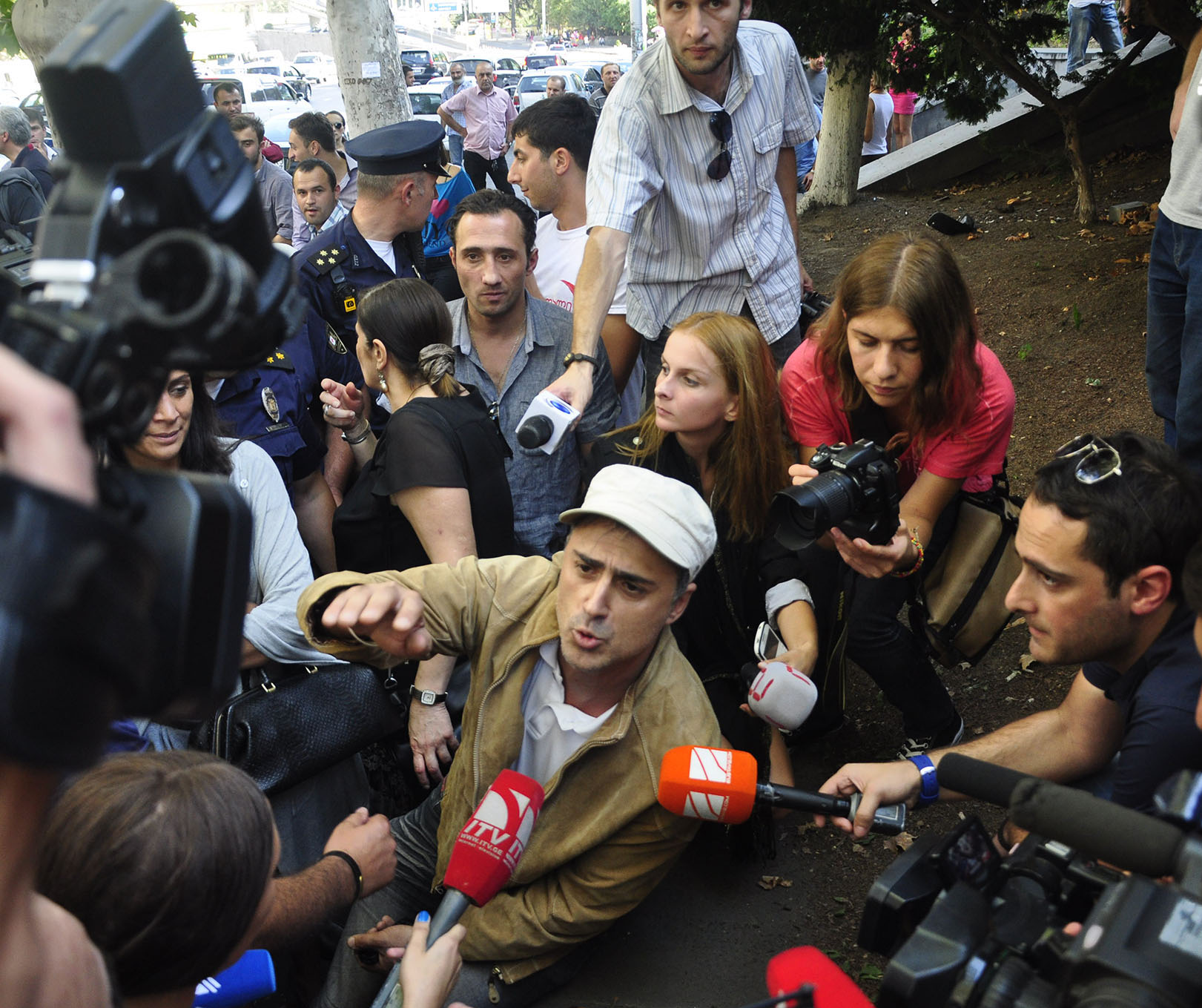 Some showed support for Kvesitadze and Paichadze, while others demonstrated in support of their dismissal. (Interpressnews.)

Paichadze was by some seen as pro-Saakashvili, a reputation earned while there was a very vocal opposition to the outgoing president’s nine year rule. The soft spoken journalist hosted the talk show Dialog, where he critically questioned many of the organizers of massive opposition protests a few years back; a movement which ultimately grew into the Georgian Dream coalition, which won last year’s parliamentary election and is now in government.

Some have also perceived Kvesitadze as supportive of the outgoing president.

The GPB director’s decree doesn’t contain any explanation of the dismissal of the two.

Kvesitadze said her show Aktsentebi should have been started on September 8, but that didn’t happen.

“This is pressure on the media before the presidential election,” she said. “Closing political talk shows has a direct influence on the election environment and the election itself. Tkemaladze will have to answer why he made this decision.”

Tamaz Tkemaladze, who is the acting director of GPB, didn’t comment on the dismissals, but made small comment to media after the press conference.

“Do you know what kind of people used to work here? The greatest journalists and personalities, and they were thrown out of here with whips, but no-one said a word,” he said. “What’s with this Kvesitadze and Paitchadze? I’m telling you that I made this decision because they are partial.”

Eka Kvesitadze wrote on her Facebook page on September 3 about that her talk show would be closed. She wrote that new director, who later was dismissed by the board, a number of times promised her that her show would not be closed. But she writes that the day before, she learned that Aktsentebi wasn’t on the list of programs anymore.

“It is also interesting that for eight months I’ve seen the director once by accident,” she wrote, adding that her attempts to meet him and get clear answers about the show were unsuccessful.

Local non-government organizations, which work on election issues than released joint statement about the situation at the public broadcaster.

“The two anchors are known for their critical views of the government, and are perceived by parts of society as biased in favor of the United National Movement. Their criticism of the current government is thus seen as a violation of the concept of political neutrality,” the statement reads. It is signed by International Society for Fair Elections and Democracy, Transparency International Georgia, Georgian Democracy Initiative, Human Rights Education and Monitoring Center and Media Development Foundation.

“The GPB’s management will need to provide solid and impartial argumentation to justify the closure of these programs; otherwise, questions will arise concerning political bias of the management itself,” the statement says.

The NGOs believe the current confusion will have a negative affect not only on the reputation of the Public Broadcaster but may also affect the pre-election environment in general.

Zviad Koridze, who works on media issues, believes that the board dismissed the GPB’s director general for political reasons, and that when the acting general director dismissed the two journalists and closed their talk shows without arguments, this makes him believe that ‘this is a decision made due to the political fight between the two parties’ which is unacceptable in the Public Broadcaster.

“On the other hand, the problem is that the decision was made without any argument,” he told DF Watch. “There are no arguments about dismissing the director general either, and it is also important that the contracts of the two journalists were also suspended without arguments.”

Koridze thinks there is a political crisis, governmental crisis and creative crisis and it is hard for the rest of the journalists to work on the background of this type of decisions.

“And in addition, this is an election campaign period and the Public Broadcaster doesn’t fulfill its obligations defined by the law,” Koridze says.

He explains that the law on broadcasting directly obliges GPB to have political talk shows and discussions before an election.

“Now GPB violates this regulation of law and this, I think, will have negative reflection on the election.”