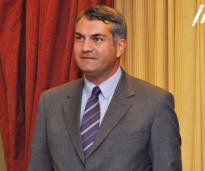 Both delivered a written resignation, but Machavariani told DF Watch that President Giorgi Margvelashvili asked him to leave. He didn’t specify the president’s reason for doing this.

Margvelashvili has not commented, which has made the public more interested in what happened and caused speculation that he was under pressure by the current and former prime ministers.

The president didn’t respond to the ex-PM’s statement. A few days ago, Margvelashvili arrived in Kiev together with Machavariani for the inauguration of the new Ukrainian president.

Nothing has been said about Lasha Abashidze, except that he is the brother of the president’s ex-wife.

Machavariani thinks this decision has to do with Ivanishvili’s position. In addition, Ivanishvili earlier said that he is dissatisfied with Margvelashvili.

“We speak a lot and this is not the first conversation after Ivanishvili’s interview. We spoke together and probably we will have more opportunities to speak more and learn more,” Machavariani said.

However since nothing has been told about Lasha Abashidze, there is another assumption that there was a conflict between Machavariani and Abashidze and that is why the president decided to fire them both.

Another theory is that during the trip to Kiev, Machavariani organized a meeting between Margvelashvili, Davit Bakradze, UNM member and former speaker of parliament, and Raphaël Glucksmann, former advisor to Mikheil Saakashvili, and Ivanishvili didn’t like this, as he perceives Saakashvili and his party as enemies.

Machavariani denies this and says that there wasn’t such a meeting. The newspaper which reported that the meeting took place is seen as under the control of Tbilisi Mayor Gigi Ugulava during Saakashvili, but currently believed to be controlled by Prime Minister Irakli Gharbiashvili.

Political commentators find it difficult to comment, because even the president hasn’t officially commented about two of his staff leaving.

“If it turns out that this was a forced decision, this will be very bad for democracy in the country,” plitical expert Khatuna Lagazidze says.

She fears that another possible explanation is more likely, that Ivanishvili and Gharibashvili, who is step by step gaining all power and has the full support of Ivanishvili, are attempting to separate the president from his close team, which was taking care to strengthen the president’s pro-Western course.

Two deputy heads of the president’s administration also resigned. It is currently not known who will replace them.