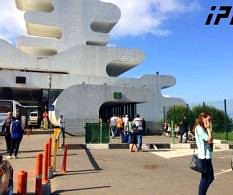 TBILISI, DFWatch–Georgia’s border crossings with Turkey at Sarpi, Kartsakhi and Vale are working normally after being partially blocked on Saturday morning due to the recent events in Turkey.

A short statement by Georgia’s Revenue Service says passengers and freight are moving normally to and from Turkey without interruptions.

There were crowds of people, especially at Sarpi and Vale border points, because people were allowed to enter Georgia from Turkey but non-Turkish citizens couldn’t cross over into Turkey and there are many Georgians who commute daily across the border.

On Saturday, the Interior Ministry ordered a reinforcement of security on the land border. The entire staff of the MIA’s border police is mobilized and the Georgia-Turkey borders are highly protected. Also the marine border police are mobilized off the coast of Adjaria.

Meanwhile, Manana Kobakhidze, an MP from Georgian Dream, said on Rustavi 2 that despite the tragic events in Turkey, the prime minister will go through with a visit planned in the near future.

“We are expecting the visit to take place, despite everything,” Kobakhidze said.

Two flights from Istanbul’s Ataturk airport arrived in Georgia on Saturday. The airport was closed during the crisis, and the passengers had to stay there overnight. Some of them said they had had a terrible night. There were also some who didn’t know what was happening.

Three more flights are planned during the night, bringing passengers from Istanbul to Tbilisi and vice versa.

Georgian Ambassador to Turkey Irakli Kopaltadze said that so far there is no information about dead or injured Georgian citizens in the coup attempt.

“The attacks were directed at government entities – ministries, parliament. Several bombs exploded. There are no Georgian citizens among the dead or injured.”