Tree-cutting in Tbilisi demonstrated against

Tree-cutting in Tbilisi demonstrated against 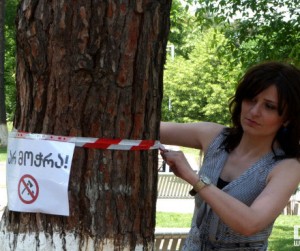 Activists gathered on Deda Ena Square close to the center of Tbilisi to protect trees from being cut. (Photo: Mari Nikuradze.)

TBILISI, Dfwatch – Groups in Tbilisi today held a small symbolic protest against the mass cutting of trees in the capital.

Transparency International Georgia and the organization Green Alternative joined other young activists and local residents on the Deda Ena (Mother Tongue) Square, which is located near Agmashenebeli Street, where trees were cut few days ago.

Participants attached notes to the trees in the part, saying ‘do not cut’.

They plan to continue with small demonstrations in the place where hundred-year old trees disappeared.

“When it comes to cutting down trees which were planted years ago before I was born, of course I will come out and protest. It’s my health, my children’s health. When do they think their new trees will grow which are already dry?” Tamriko, 47 says.

She says she was in shock when she came home the other day and saw that the street was naked.

The trees being cut are of the species called plane trees. These are common in many cities with a southern temperate climate as a way of providing shade in the hot summer, particularly in Spain.

According to the organizers of the demonstration, the reason the trees are being cut is that the flowers of plane tree causes an allergic reaction for a majority of people and they want to replace the plane trees with other species.

“But they don’t even know that replacing trees in May is not possible, it won’t have positive result; it is not the time for planting trees,” Manana Kochladze from Green Alternative says.

However, other participants remember that not only plane trees have been cut in Tbilisi lately, but also lime and fir trees.

People earlier this year protested in Kikvidze park in northern Tbilisi, where trees were cut to make room for a new police building. A vigil was organized day and night to save the rest of the trees from being cut, and activists literally ran after the clearance workers, who wielded electric saws and tried to sneak up to the trees and cut them down.

At the corner of Deda Ena Square there is another construction site for a new house of justice, which are also rapidly being erected by the government in different regions and districts, locals say. These also sacrifice some trees.

The reason in his opinion is that Liberty Bank wanted its poster to be more visible. Apart from that they were visually blocking the advertisement board, there was no reason to cut down the trees.

“Capital’s green service is busy cutting trees,’ he says, ‘ in fact, hundred-year old trees are cut for private interests in the capital where there is now a problem of greenery.”

Participants at today’s gathering signed a petition to the Mayor of Tbilisi, asking for being allowed to be involved in the decision making process regarding the environment in the city. They asked that there is organized public meetings and discussions to review problems and new initiatives which are to be implemented in the city.