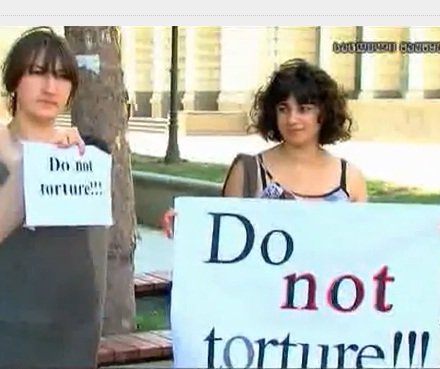 Several organizations demonstrated in Tbilisi against torture in the prisons. (TV9.)

140 prisoners died in prison during 2011 year, 40 percent of them had injuries on their body.

The number of suspected cases of mistreatment gets longer and longer, and speaking at a conference to mark the International Day in Support of Victims of Torture the ombudsman Tuesday presented a list of hundreds of such cases he wants authorities to investigate. A declaration called Together against Torture was signed.

The day was also marked by staff of Georgian Young Lawyers Association who gathered outside the central police station in Tbilisi and then moved to the old Ministry of Internal Affairs building. They say that although the number of incidents of torture is reduced, the problem still exists.

The organization Article 42 of the Constitution held a rally outside parliament and called on the government to take effective steps to improve the situation.