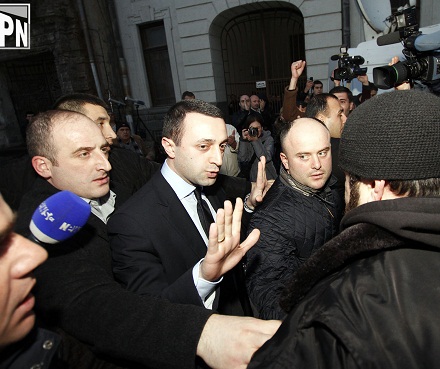 TBILISI, DFWatch–Police today detained a person who Friday hit Chiora Taktakishvili, member of parliament for the National Movement, causing bleeding and injuries to her nose.

According to the interior minister police this morning detained Giorgi Mamaladze, who is accused of beating Taktakishvili. He is suspected of hooliganism.

Police already questioned about ten people for the same case, as witnesses. Two of the witnesses, rally participants Melor Vachnadze and Mikheil Meskhi, were detained and released for USD 60 bail each.

Melor Vachnadze was released from prison January 13 with a status as political prisoner.

The interior minister published another statement along with a video, which shows that police had organized two corridors for the National Movement members to avoid a confrontation; however UNM members and activists claim they didn’t see the corridors.

“It is quite obvious from the video recordings that the approach of Samegrelo-Zemo Svaneti Governor Tengiz Gunava triggered the first signs of unrest among protesters. Despite the advice of police to enter the building immediately, he still remained outside with participants of the protest rally, and this made the situation even worse,” the interior minister said yesterday.

President Mikheil Saakashvili’s address to the nation was planned at 18:00 at the National Library. It was originally to be held earlier in the day in parliament in Kutaisi, but the parliamentary majority postponed it. Two rallies were ongoing outside the library hours before the speech.

One of them was in support of political prisoners with people gathered at the entrance to the library, many carrying brooms, which became a symbol of the prisoner abuse scandal in September, 2012, and photos from the violent dispersal of an anti-government rally on May 26, 2011.

Supporters and activists for the National Movement were gathered at a nearby park close to the National Library. Police was mobilized outside the library building. At 18:00, many people were already gathered and police trying to put them close arranging space at the entrance but failed, as Gunava came to enter through the main entrance.

Men started shouting at and struggling with the police to get closer to him and beat him, but the police line held them away. It took Gunava a long time to approach the entrance and go inside, while police barely were able to hold the crowd pushing in waves outside the library.

For a moment the situation was calm, until Tbilisi Mayor Gigi Ugulava led a column of parliamentarians and National Movement party activists that marched towards the crowd.

People didn’t let him come close to the entrance. Many tried to beat him, but he avoided injuries. He and the party activists turned to go away, but then people followed after them.

“My injured nose doesn’t hurt today, but citizens who by accident got there were injured. Ivanishvili and Gharibashvili destroyed the Georgian police, which we built together for nine years,” Taktakishvili said on Friday.

Other people, activists of the minority, who somehow expressed their support for the UNM were also beaten, many of them bleeding. Parliamentarians managed to go down to Baratashvili Street and approach their cars on the way making statements to the media.

Meanwhile, the interior minister came to the library and was greeted by clapping and shouts of ‘best minister’ and ‘good man, our man’. Despite his appeal to those gathered to avoid violence and leave the place, protesters didn’t leave.

Later, it became known that the president had changed venue for his speech and was going to hold it at his residence in the Avlabari district. Many protesters decided to go there. Two ladies came to the library saying ‘I protect my president’ and reportedly scolded the protesters. Both of them received face injuries. They were escorted to their car.

Protesters moved to the president’s residence, which was already protected by police, who had formed a line at the entrance. No serious incidents took place at the residence. Protesters shouted at those who went in and out of the residence, but when the speech was over and the guests left, they left too.