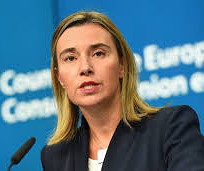 The letter is addressed to Federica Mogherini. (EU Commission.)

TBILISI, DFWatch–Eight non-governmental organizations in the Georgian capital ask the EU to specify exactly how to measure the reforms the country is carrying out after signing an association agreement with the EU in 2014.

NGOs also play a role in monitoring the reform process, as participants in the EU’s Eastern Partnership Civil Society Forum, a consultation mechanism between Brussels and NGOs in post-Soviet countries in Eastern Europe.

The monitoring process of the agreement and agenda revealed that certain goals and obligations are too general, which makes the evaluation process complicated, the groups explain.

As the process of visa liberalization, which includes detailed monitoring of reforms, is coming to an end, it is necessary to create a new mechanism which can determine precisely and in detail what the future reforms will be, the letter states.

There should be negotiations between the foreign affair service of the EU, the government of Georgia and the EU delegation in Georgia about creating a detailed association agenda, and consultations should be held with civil society, politicians and other interested parties, it continues.

“We believe that a document of the association agenda, which Georgia and EU will agree on, has to be stipulated in details,” the letter addressed to EU’s foreign policy chief Federica Mogherini reads.