Tbilisi mayor to be questioned about violence today

Tbilisi mayor to be questioned about violence today 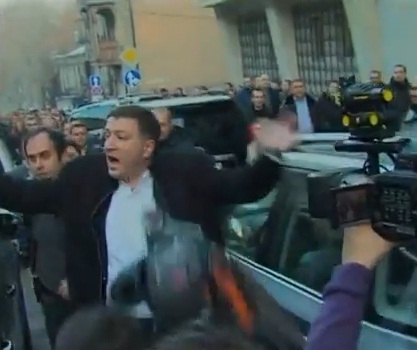 Mayor Gigi Ugulava waving his arms, urging supporters to break through a crowd of demonstrators Feb. 8, 2013.

TBILISI, DFWatch–Tbilisi City Court Friday issued a ruling that orders the city’s mayor, Gigi Ugulava, to appear before the police and explain himself about a massive street scuffle that he was involved in February 8.

The court instructs Interior Ministry employees to question Ugulava at 15:00 on Saturday, responding positively to a request by the Prosecutor’s Office. Tbilisi City Hall confirms in a statement that Ugulava will be there.

February 8, a crowd of people angry about the treatment of prisoners blocked the entrance to the National Library, where the president was to hold his annual state of the nation address. Mayor Ugulava led a charge by Saakashvili supporters as they tried to break through the crowd and get inside, but the attempt ended up in a massive scuffle which led to many people getting injured.

A video posted on the Internet shows how the mayor, waving his arms in the air, urged his people to crash into the antagonistic crowd which was blocking their way.

President Saakashvili blamed the incident on the police and claimed it had failed to offer protection. But Interior Minister Irakli Gharibashvili said Ugulava had been offered safe passage, but rejected the offer.

The Interior Ministry later asked Ugulava to come for questioning several times, but Ugulava used his legal right as a mayor to refuse to come to the police, and instead invited investigators to come to his office at Tbilisi City Hall. Investigators declined his offer. The Prosecutor’s Office then asked the court to order Ugulava to appear for questioning. He will have status as witness.