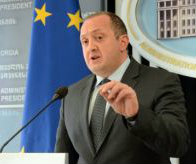 TBILISI, DFWatch–The signing of a new treaty between Abkhazia and Russia has caused outrage in Tbilisi.

Georgian President Giorgi Margvelashvili went as far as saying that the treaty turns the breakaway region into a part of Russia.

Abhkazia has been run by an unrecognized government for two decades after a war with Georgia. Russia maintains military bases there which were boosted following the Georgia-Russia war in 2008 over the other disputed territory, South Ossetia.

Abkhazia will receive 12 billion rubles (nearly USD 262 million) of aid in the next three years, five billion of which will be paid already in 2014.

Putin said after signing the treaty that there have been 11 billion rubles worth of investments from Russia in Abkhazia during 2009-2013. This aid has led to more than 160 buildings and installations being refurbished. He also said there are new goals and long-term guidelines planned.

The treaty, which seems to be retaliation for Georgia signing an association agreement with the EU earlier this year, has the following priorities: implementation of coordinated foreign policy, common defense and security area, creating common social and economy area, and assistance for social and economic development.

When it comes to a coordinated foreign policy, Russia is to strengthen its efforts toward the international recognition of Abkhazia as an independence state.

Among UN member states, only Russia, Nicaragua, Venezuela and Nauru currently recognize Abkhazia, but also disputed territories like South Ossetia, Transnistria and Nagorno-Karabakh do so. Vanuatu and Tuvalu withdrew their recognition within the last two years.

The part of the treaty about creating a ‘common defense and security area’ involves planning to create a common military force consisting of Russian and Abkhazian soldiers which will aim to repel any military aggression. It also involves common measures in order to protect the  borders of Abkhazia. An attack on one of the parties to the treaty will be perceived as an attack on the other, requiring military assistance.

No later than three years after the treaty comes into force, ‘complex measures’ are to be taken in order to ‘harmonize legislation’ about customs.

One of the points of the treaty says that Russia will take additional measures in order to simplify procedures for citizens of Abkhazia to get Russian citizenship.

Another item is to bring pensions up to the same level as in Russia by the beginning of 2018, but it will only be extended to those who are Russian citizens, which most but not all people in the breakaway region are.

The treaty involves cooperation in healthcare as well. Abkhazia must create all the necessary conditions for medical insurance for those among its population who are Russian citizens.

Another point, about education, is about Russia assisting Abkhazia in implementing programs to further the development of the Abkhazian language.

The treaty is for ten years with prospects to prolong it for five more years.

Russia plans to sign the same kind of treaty with the other breakaway region, South Ossetia, but no date has been set.

The signing of the treaty with Abkhazia caused a strong reaction in Tbilisi.

Georgian President Giorgi Margvelashvili even went as far as saying that the treaty turns Abkhazia into a part of Russia. He said the treaty is a gross violation of international law.

“This step creates new challenges to Georgia, also to our partners in Europe and in all over the world,” Margvelashvili said.

Signing the treaty will create difficulties for maintaining stability in the South Caucasus and bring to a deadlock the negotiations between Russia and Georgia about normalizing relations, he said.

Margvelashvili continued saying that he will hold consultations with political parties, including those without representation in the parliament, about how to react and counter the problems resulted by the signing of the treaty. The consultations will also involve NGOs, scientific and public organizations.

The president also addressed Patriarch Ilia II and representatives of all the other confessions in Georgia to use all measures in order not to allow the assimilation of the small nations.

Speaker of Parliament Davit Usupashvili said on Tuesday that the steps by Russia are doomed to fail. He told journalists that he is ready to join the consultations proposed by the president.

“How can you imagine any citizen of Georgia refusing to be involved in this process,” he asked, adding that whole population of Georgia must be firm and stern by saying that Georgians and Georgia will never accept what Russia wants.

Prime Minister Irakli Garibashvili also said he considers the signing of the treaty an annexation. He said he thinks this policy is against the Georgian Constitution and international obligations undertaken by Russia, including the ceasefire agreement of August 12, 2008, it is gross violation of principles of international law.

“It creates a serious threat to the security of the region and Europe in general,” the PM said.

It is still unknown what steps Georgia’s partner countries will take, but U.S. Ambassador to Georgia Richard Norland said that Washington actively observes current processes and the U.S. never recognizes any treaties signed with the de facto authorities in Abkhazia.

Head of the EU Monitoring Mission in Georgia Toivo Klaar expressed support for Georgia’s territorial integrity. He said after meeting with the speaker of parliament that the treaty will never be able to change anything in the EU’s approach and the territorial integrity of Georgia remains untouched by it.

The issue will be raised in the EU, the Council of Europe and NATO. Georgia also requested to hold a session of the UN Security Council to discuss the new treaty, as well as a session of the Permanent Council of the OSCE. Visits are planned in to the capital cities and Georgia is planning to raise the treaty issue at the upcoming round of the Geneva talks on December 10.

Georgia wants to ask partner countries to condemn the treaty and call on Russia to avoid actions that go against international law.

NATO’s secretary general wrote in a short statement that NATO fully supports the sovereignty and territorial integrity of Georgia within its internationally recognized borders and don’t recognize the treaty signed.

“This so-called treaty does not contribute to a peaceful and lasting settlement of the situation in Georgia,” statement reads. “We continue to call on Russia to reverse its recognition of the South Ossetia and Abkhazia regions of Georgia as independent states and to withdraw its forces from Georgia.”

US Department of State also responded to the issue that it will not recognize the legitimacy of any treaty between Georgia’s Abkhazia region and the Russian Federation.

“We once again urge Russia to fulfill all of its obligations under the 2008 ceasefire agreement, to withdraw its forces to pre-conflict positions, to reverse its recognition of the Georgian regions of Abkhazia and South Ossetia as independent states, and to provide free access for humanitarian assistance to these regions,” it reads.

“We renew our full support for the Geneva international discussions as a means to achieving concrete progress on security and humanitarian issues that continue to impact the communities on the ground in Georgia.”