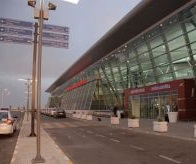 TBILISI, DFWatch–A new terminal building will be built at Tbilisi Airport, due to an increase in passenger numbers. The new terminal will be finished within an year.

Giorgi Molodinashvili, Deputy Director of the Georgia’s Airports Union, told DF Watch that in spring, the runaway at Tbilisi airport will be undergoing maintenance, and construction on the new terminal is about to begin.

TAV Urban Georgia will carry out the construction work. According to preliminary information, the company should finish in one year.

Molodinashvili says TAV Georgia signed an agreement that in case the flow of passengers exceeds 1.8 million, TAV was obliged to construct a new terminal.

“Since the flow of passengers was more than 1.8 million by the end of 2015, it was planned to construct a new terminal,” he told us.

The project is currently in the planning stage and precise time schedule is not yet known.

“However, construction work will start in spring. I cannot give details about the sizes of the new terminal, investments or other details, as this is the prerogative of TAV Georgia,” he said.

Tbilisi International Airport has been managed by the Turkish company TAV Urban Georgia since October 31, 2005. The company owns management rights until November 2027.

The company has announced that flights will be halted during daytime for four months starting from March 4 due to rehabilitation works. Information about the new terminal building will be published later.

TAV announced that flights which are planned in this period will not be canceled, but rescheduled.

According to the company, the flow of passengers has quadrupled since 2005 and further increase is expected, which is why it is necessary to upgrade the infrastructure.