Tbilisi’s old trees are being razed to the ground

Tbilisi’s old trees are being razed to the ground 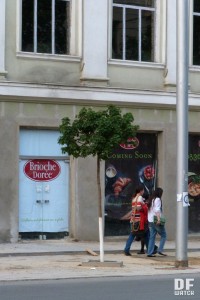 Young saplings are put up in place of a lush green foliage which used to cast parts of Tbilisi in a cool shade during summer. (All photos by Mari Nikuradze.)

TBILISI, DFWatch – One hundred year old trees are being cut down in Georgia’s capital Tbilisi and are replaced with new saplings, which will need decades to reach mature height.

A few days ago workers started cutting trees in Tbilisi’s old district at the end of Agmashenebeli Street near the Dry Bridge – an area perhaps best known among non-Georgians for its open air market with collectables, art and handicraft.

Buildings on the streets are to be rehabilitated; they are covered in nets surrounded by construction material. It was nearly impossible to see the old façades of buildings in that area, because they were covered by the lush foliage of trees in front of them. Now only the trees’ naked stems remain.

Sellers at the shop and residents in the market say that a few days ago, tree surgeons came with trucks and just cut the branches off the trees, which is usually done in this period to let trees grow new branches. However the next day they cut the rest of the trees to the end.

Until the roots are dug, people at the bus stop use them as makeshift chairs to sit on until their bus arrives.

“I don’t know why they were cut,” one of the construction workers says, “it was just an order. Maybe the trees were disrupting rehabilitation works. But I think they are going to plant new trees. Still it is a pity that they have cut hundred year old trees.”

Several years ago, Tbilisi City Hall started rehabilitation of Agmashenebeli Street. This is one of Tbilisi’s oldest streets, and used to have such a flourishing tree growth that it was almost in shadow during summer when temperatures climb to 40 C in the city, making it a pleasant route to walk. One half of the street is finished, but tens of trees were cut all over the street to the end. Today, the street seems almost deserted in comparison to its former hustle and bustle.

New trees of different species were planted instead. However, if you now pass by you will discover that majority of the plant leaves are dried out.

Trees were also cut on Chavchavadze Avenue a few weeks ago, also a stretch formerly covered in lush green. Up to ten trees were cut in front of one building which is now being rehabilitated. Small plants are visible in front of it at the place where trees were dug out with their roots.

Earlier this year, there was a campaign to save the trees in the old Kikvidze Park in northern Tbilisi, where trees were cut to empty place to build new police building. (https://dfwatch.net/?s=kikvidz)

Transparency International Georgia in April published an article saying that City Hall announced a tender for this place to buy trees to plant there – specifically 120 cypress plants. 250 000 lari was named as the sales price.

Finally, City Hall signed agreement with Green-service Ltd. There was no other bidder.

‘For comparison, we reviewed a contract that the City Hall signed with another supplier on 30 January. Under that contract, City Hall bought 5 000 plants of various types (cypress, tilia, maple, cedar, pine, ash) and the maximum price of a single plant was GEL 30, i.e. 33 times less than in the case of the Baratashvili Street tender.’

On May 9 Tbilisi City Hall released statement informing about cancelation of agreement with Green-service on the grounds of information provided by TI Georgia.

It is planned to cut the rest of the trees on Agmashenebeli Street. Old plane trees are left only on the small area of the street, which also will be rehabilitated.

Rally protest is planned on Saturday to prevent cutting the rest of the trees and to generally protest cutting trees in the city, which used to clean the polluted air of the crowded Tbilisi.