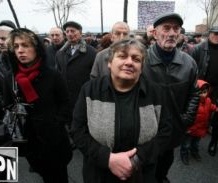 TBILISI, DFWatch — Victims of a hailstorm last summer in the Kakheti region are demonstrating in several towns and villages Tuesday, claiming that the authorities have inaccurately calculated their losses.

There are rallies ongoing in the villages Gavazi and Kardenakhi in the Kakheti region. Protesters declare distrust in their local mayor and the commission which is estimating how much damage each family has suffered.

They say they have only been partially compensated. According to some of the villagers, people who didn’t really have any big loss have received large compensations, while those who really had big damage received from about USD 60 to USD 680.

Now, protesters are waiting for answers from the local government. If they don’t recalculate losses, villagers threat to block the roads.

Local media report that Kvareli mayor Davit Kevkhishvili met the villagers, and the meeting ended with a verbal confrontation. The mayor listened to complaints from about 200 people who had gathered and encouraged them to write complaints. He said they should count their loss once again and indicate which of the commission members were there, who visited their house to estimate the loss.

“We will come and check whether your complaints are a lie and whether you gathered here for no reason. I will appeal personally to appropriate bodies,” he said. This was perceived as a threat by the crowd and led to a verbal confrontation.

Also on Tuesday, a few hundred people in the village Apeni, in the Lagodekhi region, blocked the highway to Tbilisi, which led one angry car driver to get out of his car and start shouting to the demonstrators. They also accused the commission of not being objective and claimed that compensations are unfairly distributed.

One woman told Information Center of Kakheti that her neighbors received around USD 3 000, while she used to rent a few acres of land, which was completely destroyed.

“I’ve got four children. I don’t even have flour at home,” she said crying. “I don’t know what to do. I won’t leave. I will bring all my four children and sit here, even if I have to visit Ivanishvili. My neighbors left to buy cars, while I cannot even buy flour.”

A representative of the local authorities told the crowd that they will find out who is to blame.

Yesterday, there were rallies in the villages Lagodekhi and Kvareli. Villagers threaten to continue protesting if their demands aren’t met.