Stalkers with cameras followed journalist for a week

Stalkers with cameras followed journalist for a week 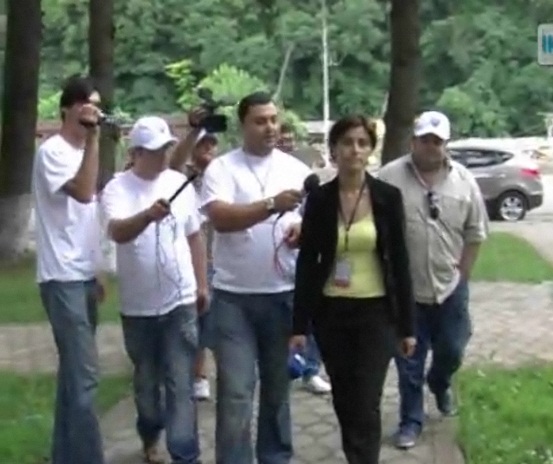 Almost a dozen stalkers have been terrorizing journalist Eka Dugbaldze for a week. A strange 'exposé' apparently based on their footage was produced by pro-government online television iTV.ge. (Channel 9 screengrab.)

TBILISI, DFWatch – A journalist from an online media outlet financed by Channel 9 has been stalked for a week by a group of up to ten people with video cameras asking her weird questions.

Ekaterine Dugladze is a journalist at info9.ge, a new website financed by Channel 9, which is affiliated with Bidzina Ivanishvili, front man of the opposition Georgian Dream coalition.

The website published a 7 minutes long video, where the journalist is being followed by this group while trying to carry out her work.

The mysterious stalkers are mainly asking questions about Georgian Dream and the finances of info9. Even though the journalist does not answer their questions, they continue following her. The group is wearing white t-shirts and caps and ID cards which say they are from Media Group.

Later, it became known that the white-clad stalkers are employees of Imervizia, a local television station in the Imereti region. The director of Imervizia confirmed in an interview with info9 that these people really belong to her company. However, the footage these people take with their cameras never end up being broadcast by Imervizia, a popular TV station established in 1991.

However, the material was used by iTV, pro-government online television, which published a report based on footage from one of the stalkers’ cameras. The report is about how calmly the info9 journalist and her cameraman are working. The author of the iTV report says that after this ‘interview’ was recorded, Eka Dugladze had problems and was threatened with being fired. They do not name the source, but say that this has just become known. The title of the report is ‘Until death with Bidzina.’

Director of Imervizia said she has never instructed her employees to do such a thing.

Manana Eliashvili, chair of Info9 says they do not know what relation there is between iTV, Imervizia and this so-called media group, but obviously there is a connection.