South Ossetia to go to the polls again

South Ossetia to go to the polls again 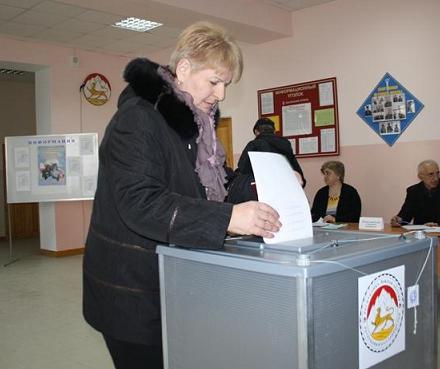 Voters in breakaway South Ossetia will tomorrow cast their votes for the fourth time in five months to select a new leader. Photo shows voting in the first round of the second election March 25 2012. (RES.)

The first election was held in November 2011. The Kremlin favorite and an opposition leader got through to the second round, in which the opposition leader was clearly winning. But the so-called supreme court declared the elections failed and scheduled new elections for March 25.

This time too, the Kremlin favorite failed to win. Dmitry Medoev, South Ossetia’s ambassador to Russia, did not go through to the second round. Instead, former local KGB head Leonid Tibilov and David Sanakoev, South Ossetian presidential commissioner for human rights, are to compete tomorrow.

The Central Election Commission of the breakaway region informs that several tens of international observers will monitor tomorrow’s elections.

If more than 30 percent of voters cast their vote tomorrow, the elections will be valid and the winner will be the one with a majority of votes.

Neither Georgia, nor NATO, USA or the EU recognizes the elections.