Search for bodies continuing after May 17 landslide

Search for bodies continuing after May 17 landslide 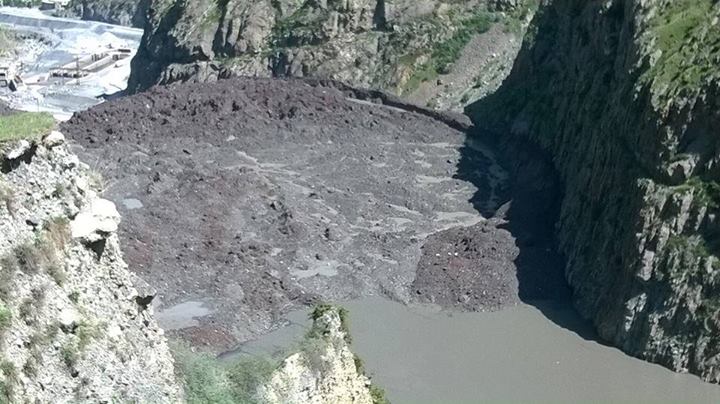 The mud from the May 17 landslide in Dariali clogged the river Tergi and may have killed up to seven people.

TBILISI, DFWatch–Nearly two weeks after a catastrophic landslide hit Dariali Valley in the Caucasus mountains, the search is continuing for four people who are still missing. Three have been found dead.

The Road Department in Georgia is working in two shifts to clean up the disaster area where a hillside tumbled down in the morning of May 17, clogging the river Tergi and cutting off the only road through the Caucasus Range.

The clean-up work is concentrated toward getting the road reopened, said Vazha Panchulidze, Deputy Head of the Road Department. Larsi border crossing is still closed for people and traffic.

Meanwhile, the European Commission is sending a team of experts to Georgia to identify potential threats to the local population and give recommendations. The experts are being sent by the request of Georgian Government.

Much effort has been put into digging a new path for the river Tergi, which was clogged by mud. The landslide also hit several trailer trucks. Two of the bodies were found inside a tunnel that is being built for a hydro power plant.

There are some who consider there is a risk of another landslide, but  Panchulidze said geologists have given permission to carry out clean-up work in two shifts.

Both the search for bodies and the clean-up work is being done more intensively, according to Panchulidze, who explained that road rehabilitation work starts in locations where the rescue work is finished.