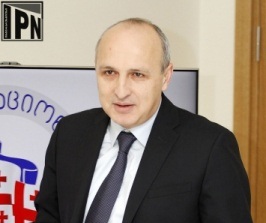 Impatient. National Movement Secretary Vano Merabishvili can’t wait four years for the next election. “There are other methods,” he says. (Interpressnews.)

TBILISI, DFWatch — President Mikheil Saakashvili’s political party says it can’t wait four years for a change of power and instead will try to ‘weaken’ the Ivanishvili government.

Secretary General of the National Movement, Vano Merabisvhili, says they do not plan a coup, but that they have a whole ‘arsenal, virtual and practical, which will weaken current government.’

Merabisvhili, a former interior minister, said this during a meeting with citizens at the party office on Friday. He said UNM already has a plan for how to weaken the current government, adding that that they cannot wait four years for getting back into government.

“It doesn’t mean we will organize a coup tomorrow and throw them away,” he said, adding that they have the resources to change the government before their the end of its term and will get back into government.

“Getting back into government doesn’t mean that we have to conduct another parliamentary election. There are other methods: to implement real public control, weakening state institutions, recruiting people,” Merabishvili said.

He didn’t explain why the party is planning to recruit people and what people he was talking about.

He evoked the memory of the period before the Rose Revolution in 2003, when the UNM came into power through a peaceful coup d’etat, saying that Saakashvili’s party used to control the capital in those times.

In the local election in 2002, the party had a strong showing, but the Labor Party was in first place. The elected council appointed the city mayor at the time. UNM didn’t have enough votes, so they held negotiations with Labor Party leader Shalva Natelashvili, who today is a strong critic of Saakashvili. The negotiations led to Saakashvili’s party receiving approval for appointing the mayor and Mikheil Saakashvili was appointed. This gave the party important levers which were employed during the street protests which eventually led to the ouster of then president Eduard Shevardnadze.

“We should start going back to the government in some form and also taking initiative,” Merabishvili said on Friday. The UNM still controls Tbilisi City Hall.

The former interior minister says the current government is weak and that ‘it’s a pity they cannot use the weakness and cannot attack.’

“Step by step we should oppress this government and accelerate the change of government. Time will show the form and means this will take. Today, we are busy keeping our resources and cheering people up. It’s winter, early for street rallies. We have a whole arsenal, virtual and practical, which will weaken this government,” Merabishvili said.

He spoke vaguely about a plan for what the party will do in the future.

“As soon as we get back, we will restore everything in about six months. Those who play video games, they know playing for the first time is hard, but for the second time you play it well.”