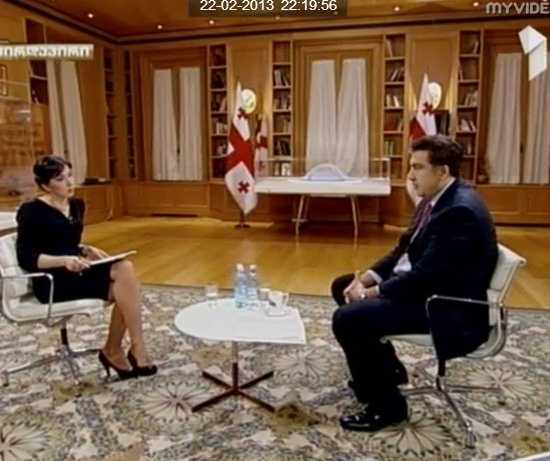 TBILISI, DFWatch–Georgian president Mikheil Saakashvili made a rare appearance on a TV talk show and spoke about his own and his government’s errors.

Saakashvili was invited to Channel 1 to answer questions about the National Movement’s time in government and his presidency. One of the things he talked about was the Robakidze case, which perhaps more than anything else has hurt his reputation since the Rose Revolution in 2003.

A few days ago, a video was aired on TV, showing the police operation of November 24, 2004, which led to the death of the 19-year old Buta Robakidze. The five minute clip appears to free police of culpability. It was handed in to Rustavi 2, a TV station known for its fealty to Saakashvili, by one of the policemen directly involved in the shooting, and has been condemned, many saying it has been manipulated.

There has been strong criticism against Georgia for the many deaths in similar operations, characterized by a ‘shoot first, ask questions later’ police tactic coupled with a lack of accountability.

Georgian viewers have never before seen him commenting on this in a TV debate. The president said there was no intention to kill people in the streets, but to stop the criminals in the country.

He said he thinks the latest video in the case ‘reveals everything.’

“If this footage existed before, where was it and this is one more loophole in our law enforcement system and court system,” he said, but added that it should also be considered that the case took place back in 2004, when they were fighting against criminals and mass killings in the streets.

Another controversial case while the UNM party was in government, is the murder of Sandro Girgvliani, a bank employee who was killed after a scuffle in a restaurant, where the wife of the former interior minister also was present.

After his state of the nation speech in the beginning of February, the president allowed journalists from all media outlets – not only those under his control – to ask him questions, something he has only done a few times in all his career. During this rare occurrence, he said that the Girgvliani case ‘was a black stain.’

Thursday evening, he added that it was a very difficult case for him personally, and he cannot say whether it was mistake, when he pardoned the persons convicted of murdering Girgvliani.

The Georgian president said he regrets that he didn’t react more to the situation in the prisons. He remarked that former prison minister Khatuna Kalmakhelidze said there was a problem in the prison system.

“There were serious problems inside the prisons and we have seen it. We saw this and probably, we should have reacted earlier, and of course one of the things I regret is that Khatuna a number of times was present here and said that we needed to react more.”

The president added that he should have visited the prisons and checked every cell.