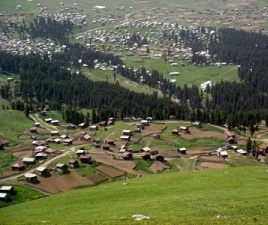 Supporters of the ruling party prevented Bidzina Ivanishvili from addressing locals in the village Beshumi in southwest Georgia. (IPN.)

TBILISI, DFWatch – Activists for the governing party Saturday prevented President Saakashvili’s main opponent, Bidzina Ivanishvili, from meeting with the population in a small mountain village in the Adjara region, in the southwest of Georgia.

Journalists are reporting from the spot that there was a scuffle in Beshumi village. Maestro and Channel 9 later showed video of the incident, which took place while both President Saakashvili and Ivanishvili were visiting the village. In order to avoid a confrontation, Ivanishvili left the village without meeting with the population.

Three weeks ago, it was announced that Georgian Dream would hold rallies in the Adjara region in the beginning of August. August 5 was set as date for a rally in Batumi, the region’s largest city and administrative center. But one day before the big rally, the governing party prevents them from meeting with the population in this village.

National Movement supporters were standing near the municipalities of Keda, Khulo and Shuakhevi, during Saakashvili’s visit there. Mainly these were youth in red t-shirts. There are also members of local government and Gia Abuladze, education minister of Adjara, who was also wearing t-shirt of the National Movement.

National Movement supporters surrounded Georgian Dream supporters and didn’t let them go. Journalists reported there was a scuffle between them. National Movement supporters blocked the road. There was verbal abuse between the parties. Ruling Party activists tried to beat Sopho Jghenti, journalist of Maestro TV, and tried to take a cameraman’s camera away from him. Tamaz Abashidze, a local Georgian Dream member, was taken away by people dressed in civilian clothes.

The police arrived at the spot, but despite their presence, journalists continued being restricted from doing their work until the end.

“Employees of the local government in Adjara blocked the road for Georgian Dream members and activists. Now they interrupt us from going up, they are trying not to let us go. I witnessed how member of Zurab Varshalomidze’s guard issued orders: let’s press them, take them down!,” said Sozar Subari by phone.

He was formerly Georgia’s ombudsman, but is now part of Georgian Dream’s top people.

“This is an ordinary provocation. National Movement violates declaration, which they created – first law of acting rules of parties, which prohibits interrupting election campaign.”

“Now you may hear yelling. Georgian Dream members yell ‘Long live to Georgia.’ National Movement responds yelling ‘Misha, Misha’, because Georgia is Misha to them,” Subari told DF Watch. He is in Khulo together with Bidzina Ivanishvili.

The situation was normalized when the businessman left the village saying that tension is not in his interest.

After this incident two supporters of the National Movement took off their red t-shirts wearing the governing party’s logo and put on blue ones with the logo of Georgian Dream. Aleko Mikeladze, one of them, says that he was ordered to put on this red t-shirt, but he didn’t like the situation and made a decision to join Georgian Dream supporters.