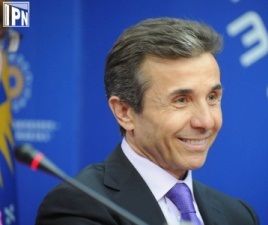 Reason to smile. Bidzina Ivanishvili gets restored the citizenship of his native country deprived from him one year ago when he went into politics. (IPN.)

October 2011, the former businessman wrote in an open letter that he was planning to go into politics and change the government through election.

This was a shock for officials in the country, who took immediate measures to restrict him from getting involved in the political life of Georgia.

Four days after the letter was published, President Saakashvili issued a decree revoking Ivanishvili’s Georgian citizenship, which he had personally granted Ivanishvili him 2004 for special merits to the country.

The businessman tried to revoke the decision in a number of court cases, but the government held out for several months and refused to satisfy the appeals by five lawyers working for Ivanishvili.

The prime minister candidate gave away his Russian citizenship and said he was ready to give away French citizenship as well, but in order to not leave him without citizenship, France refused to revoke his citizenship until the Georgian one had been restored.

The last step was to appeal to the president to give him citizenship through naturalization. The criteria for this are that he was born here, knows the language and history and satisfies other criteria.

The civil registry however refused to satisfy this appeal as well.

However, it will only come into force after the businessman is no longer a French citizen.

Article 27 is about special conditions to receive Georgian citizenship and says that the president can give citizenship to a person if this person has special merits to the country or has a profession and qualification in which Georgia has an interest.

At the time when Ivanishivli published his letter, Georgian legislation didn’t allow a non-citizen to get involved in political life, to participate in election and hold important positions in government.

But criticism locally and number of recommendation from abroad leaded parliament to make another constitutional changes by which country allowed non-Georgian citizen to participate in any election and hold three highest positions of the country: Prime Minsiter, Parliament Speaker or President, if the person is EU member country citizen and has lived in Georgia for the last five years.

By the time when parliament adopted those changes, Ivanishivli criticized it saying that it is not correct to allow non-citizens manage the country and he promised not to use those constitutional amendments and fight until his Georgian citizenship is restored, but recently when he already named candidates for future government he said he will be future Prime Minister and if by the time his Georgian citizenship is not restored than he would use rights granted by new rules of constitution.