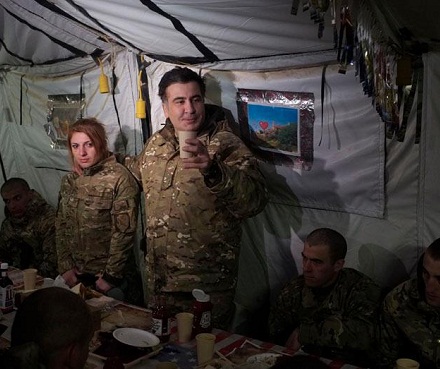 The president’s press office yesterday informed that there was intense shooting while the president was in the province where the Georgian troops are serving.

Mikheil Saakashvili arrived at the Shukvani base in Afghanistan to welcome the new year in the company of the soldiers there and spend a few days with them. In a speech he highlighted the importance of the country’s participation in this mission and that Georgia’s statehood is based on the bravery, strength and professionalism of those soldiers, as was shown in 2008, during the Russia-Georgia war.

The president’s administration posted a video on Youtube, which shows Saakashvili talking to troops at a checkpoint, asking them whether the intense shooting has stopped. A soldier answers him that now everything is alright, after which the president wishes them a happy New Year and hopes to see them return safely home.

The president’s administration also informed that after Saakashvili visited the checkpoint, they managed to repel a Taliban attack.

DF Watch contacted the Defense Ministry to ask for further information, but the ministry declined to comment.

Koba Liklikadze, a well-known journalist at Radio Liberty Georgia who writes about military issues, writes on his blog that one should be very outrageous or one should really hate oneself when the first person of the country announced one week ago a planned visit to the world’s probably worst most hot spot, in fact, on a battle field.

He meant the statement which the president’s press office made December 25, that Saakashvili was planning to visit Afghanistan for New Year. The statement provided detailed information of the president’s plans during his visit. Liklikadze writes that ‘the intelligence service of Taliban couldn’t have wished for more.’

The president’s opponents have called the latest Afghanistan trip a dangerous step only made to promote his own image.

He was criticized by former Foreign Minister Salome Zourabichvili of postponing the bad news about his previous visit to Afghanistan, February 20, 2012. Three Georgian ISAF troops were two days later reported by the Defense Ministry to have been killed by a roadside bomb. The only losses reported on ISAF’s official webpage during the week of Saakashvili’s visit was three deaths on February 20; the same day as the president’s visit.