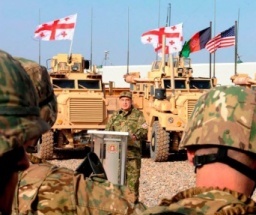 Georgian president Mikheil Saakashvili said his country's forces in Afghanistan are making a contribution to the welfare of Georgia. (Photo: Interpressnews.)

No information was released beforehand about the president’s visit to Afghanistan, and it only became known to the public via the national TV channels.

Rustavi 2 showed footage of President Saakashvili dressed in military uniform speaking to the Georgian soldiers at the base Shukvani, saying that “the Georgian military service in Afghanistan is a continuation of our great tradition.”

The first time Georgians were sent to Afghanistan to conduct a military operation was in the 1980s as part of the Soviet army. The second time began in 2004 as part of the ISAF (International Security Assistance Force) operation.

Rustavi 2 reported that the president stayed in Helmand for about two hours.

Saakashvili said that Georgian soldiers historically have been part of many famous armies and remarked that “fighting and presenting oneself is in the blood of Georgians.”

“Here on Afghan ground, villages remain since medieval times, where there lived Georgians; Gurjis as they’re called here. They were considered the bravest warriors during the Russian occupation against the armies of the Soviet Union. Soviet troops had difficulties mostly fighting with them,” the president stated.

After the speech, Georgia’s commander in chief had dinner together with the soldiers.

Saakashvili also patrolled their operational sector in Helmand in an armored vehicle.

According to the ministry, Georgia is one of the largest contributors to the ISAF operation. In the start in 2004, 50 Georgian military personnel participated in the operation. Their goal was to provide security during elections. Currently there are 936 Georgian soldiers in Afghanistan and 749 more soldiers will be added in spring, which will bring the whole contingent up to total of 1 700.