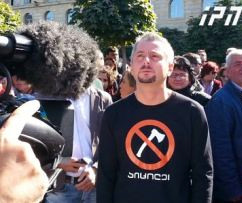 “Big brother is watching/listening/etc us,” Nika Gvaramia wrote on his Facebook page.

TBILISI, DFWatch–The CEO of Georgia’s main opposition TV channel and a key opposition figure both confirm the authenticity of audio tapes about a ‘revolution scenario’.

The recording has sent ripples across the country’s political establishment and pledge not to obey an impending court ruling over Rustavi 2’s ownership if it favors Kibar Khalvashi, a former owner, who is seen by the TV channel’s supporters as a puppet in the hands of authorities.

“You must go to revolution scenario,” Saakshvili says during conversation with Nika Gvaramia of Rustavi 2. “You must appeal to the people to defend (Rustavi 2), to erect barricades… It must be a weeks-long stand-off. You must turn (the building) into a real fortress.”

Audio-records of two conversations by former president Mikheil Saakashvili were published Thursday evening on the Ukrainian website http://uareview.in.ua. The first involves conversation with Nika Gvaramia, Director General of Rustavi 2, and the second to Giga Bokeria of United National Movement, Saakashvili’s key ally in Georgia as others either are jailed or fled the country.

Giga Bokeria also confirmed authenticity of the aired audiotape and doesn’t view it as being something extraordinary.

In the first audio, recorded probably between October 19 to 21, Saakashvili and Gvaramia allegedly discuss possible violent scenario in case if the court decides the dispute in favor of Khalvashi. Saakashvili suggests erecting barricades and metal barriers at the Rustavi 2 office and ‘hold to the end’ preventing execution of the court ruling. He even vaguely suggests repetition of the ‘revolution’.

In the second audiotape, Saakashvili discuss the same topic with Giga Bokeria, and expresses his dissatisfaction with the poor reaction of ‘idiot foreigners’. Bokeria makes the former president and now Odessa governor in Ukraine familiar with developments going on about and inside Rustavi 2. Saakashvili remarks that journalists might be puzzled, but Gvaramia ought to comfort them.

The conversation goes in details how the scenario might develop, as according to Saakashvili, Court would make decision on October 22 and authorities would implement the decision immediately by forcibly taking over the channel.

Bokeria says it is hard to mobilize many people, but Saakashvili suggests that it doesn’t matter much. He says the most important is not to allow court ruling enforcers to take over the building of Rustavi 2 TV.

“(They) shouldn’t enter (the building) without shooting,” Saakashvili said.

“I said, Nika, there might break up shooting, you should be ready for it,” Saakashvili says. “We should show that we can hold a physical showdown. If we can’t, we worth nothing therefore… and if they shoot, let them shoot. What else we can do?”

Then the two discuss details of defending the building, including possibility of erecting metal barriers against riot police.

Both Gvaramia and Bokeria stated the conversations had been recorded illegally.

“Big brother is watching/listening/etc us,” Nika Gvaramia wrote on his Facebook page.

Later Gvaramia held another emergency briefing, stating the conversation dated back on October 19.

“Ten days passed and you can come and witness whether there is a single barricade there,” he said.

Giga Bokeria commented the audios by saying that publishing conversations proved that authorities illegally wiretap on citizens. As for the content of the conversation, Bokeria said there is ‘nothing new’ in this audio as the attempt to mute Rustavi 2 is a ‘red line’, which they will resist to at all cost.

He declined possibility of the armed confrontation from the UNM part, saying that only meant to mobilize people ‘who is able to put up resistance’.

“If Ivanishvili really decides to take over Rustavi 2 building by force… If the government, law enforcement agencies or their hired detachments attack us, of course, we’re not going to tolerate that. It would be a disaster,” Giga Bokeria said.