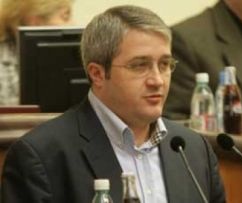 TBILISI, DFWatch–Russia has declared a Georgian member of parliament internationally wanted, accusing him of past ties to the Russian opposition and having tried to finance a revolution.

According to reports in the Russian media, investigators have charged Givi Targamadze, member of parliament from the National Movement, and announced him internationally wanted.

Vladimer Markin, Official representative of the Investigative Committee of Russia, says Givi Targamadze is accused of organizing massive disorder on Russian territory, coordinated by Sergey Udaltsov, leader of the Left Front and his assistant Leonid Razvizhzaev.

Markin said that the investigative committee in the near future will ask a court to sentence Targamadze to preliminary detention.

In December, Russian police published new evidence which strengthened the case that the Georgian politician may have tried to foment social unrest in Russia.

He said Georgia hasn’t received an extradition request from the Russian Prosecutor’s Office.

“As soon as we receive an appropriate request, we will discuss it, as the law requires it, and then make a decision.”

“We cannot transfer a Georgian citizen to a foreign state, whether it is Russia or any other country,” he said.