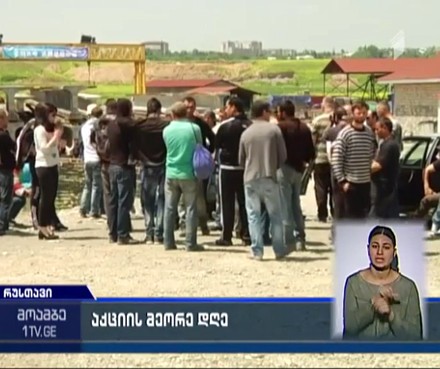 TBILISI, DFWatch–Workers on a highway south of Tbilisi are still on strike, demanding a USD 4 per day pay rise, because of the rapid devaluation of the national currency over the half year.

Efforts are now underway to try to negotiate with the Chinese company Sinohydro, which is carrying out the construction work on the upgraded highway to Rustavi, a town 20km south east of the capital.

The company is attempting to reach agreement about higher salaries with the Municipal Development Fund, which has ordered the construction.

However, the fund on Wednesday issued a statement, which says that it is not responsible for increasing the salaries of workers.

“This information aims to mislead workers and society,” it reads.

The statement continues saying that this is a dispute between a private company and its employees and such conflicts are regulated by the Labor Code.

“We hope that construction company Sinohydro Corporation will honor its obligations under the law and soon resume work.”

The daily pay of 20 laris has remained unchanged since November last year, when one USD was 1.75 laris. Today, one USD is worth around 2.30 laris, so in dollars their daily salary has gone down from around 11.50 to some 8.50 USD. Their demand is to raise the daily salary to 30 laris – 13 USD.

Hundreds of workers went on strike on May 18, and refuse to carry on unless they get a pay rise.

The construction company has promised to answer them by Thursday.