River bursts its banks in Ozurgeti, carries away two people in car

River bursts its banks in Ozurgeti, carries away two people in car 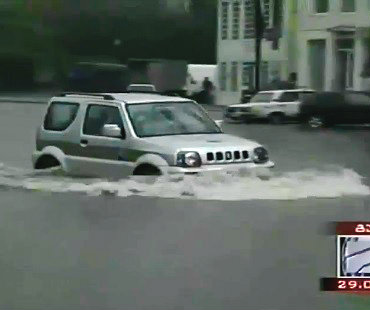 According to local media, the water carried a car with two people inside into the river Shuti. One of them was a pregnant woman. Rescue workers managed to get them out of the car, which remains in the river.

It is still raining in Guria, and the water level is rising.

Several villages nearby were also flooded Ozurgeti. Rescue personnel received about 20 calls through the night, and say that 15 houses are flooded. Crews are helping them to remove the water from first floors and basements.

Spokesperson Mikheil Gogotishvili from Ozurgeti municipality told journalists that the local government is taking steps to help the population.

The commission to count losses after natural disasters will not start to work until the clean-up work is finished.

The commission is still counting losses after a flood a few days ago in Senaki, in the western Samegrelo region.