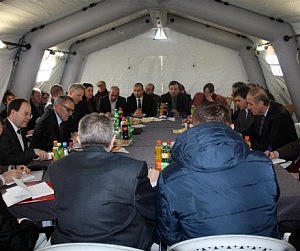 TBILISI, DFWatch–At a regular field meeting Tuesday between the parties in the 2008 South Ossetia war, Georgia brought up the question of how to bring home the body of a 19 year old boy who was recently found dead in South Ossetia after being missing for six months.

The Incident Prevention and Response Mechanism (IPRM) meeting was as usual held on the de facto border, in Ergneti. The purpose of such meetings is to involve the conflict parties in discussions of issues and everyday problems that concern people living in the zone of conflict.

During Monday’s meeting, which lasted more than five hours, Georgia’s most important topic of discussion was the issue of how to get back the body of Davit Basharuli, who disappeared in Akhalgori six months ago and was found hanged in a tree in January, in a village on territory controlled by the breakaway region.

Head of the South Ossetia delegation said after the IPRM meeting that the forensic examination of the body is not yet finished, but as soon as it is finished the negotiations about this issue will continue.

Kakha Kemoklidze, representative of Georgia’s Interior Ministry, said the process of transferring the body to Georgia may be delayed for two to three weeks due to the ongoing investigation procedures in Tskhinvali.

Kęstutis Jankauskas, the Head of the EU Monitoring Mission in Georgia (EUMM), attended the IPRM meeting for the first time, after replacing previous head Toivo Klaar.

According to EUMM, the participants also discussed cases of persons who have disappeared and whose fate remains unclear, as well as issues of law enforcement, security and freedom of movement.

The next IPRM meeting will take place on 27 February.