Rasmussen spoke to Saakashvili and Ivanishivili

Rasmussen spoke to Saakashvili and Ivanishivili 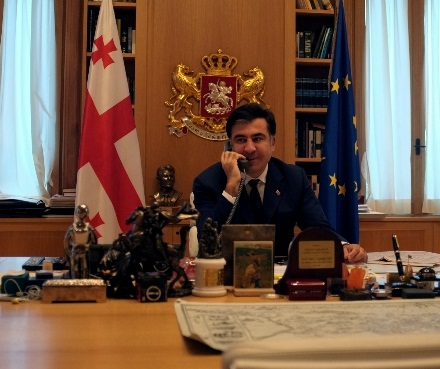 TBILISI, DFWatch — The Georgian leader Mikheil Saakashvili today had a phone conversation with NATO’s Secretary General, who told the president that today is a historical moment for Georgia’s democratic development.

Mikheil Saakashvili and Anders Fogh Rasmussen spoke about the recent parliamentary elections, according to the website of the president’s administration. The Secretary General also congratulated the Georgian people and its president on holding a free and fair election and once again confirmed his support for Georgia’s NATO integration.

Anders Fogh Rasmussen expressed his condolence for one Georgian soldier who died in Afghanistan while carrying out a military task.

The president’s administration released a video appeal from Mikheil Saakashvili after the phone call where he says that considering the well-conducted election he thinks Georgia has a chance to move forward on the way to NATO integration.

He pointed out that there is a meeting of NATO ministers in December, when a new decision may be made.

“I spoke about this issue with the candidate for prime minister,” Saakashvili said, referring to his recent meeting with Bidzina Ivanishvili.

“We have to work together, including the coalition which came as a result of the election, to go forwards in regards of NATO integration.”

The president promised to do everything to this end during the next year.

“Those illusions as if we have problems with our invaders for any political leader among and after this election, will disappear for the new coalition.”

The president remarked that Anders Fogh Rasmussen invited him to the 58. session of NATO’s Parliamentary Assembly in Prague, where he will appear as one of the main speakers.

The NATO Secretary General noted that Georgia’s NATO integration is irreversible and that Georgia has an opportunity to make an important steps on this way.

Anders Fogh Rasmussen also spoke by phone to Bidzina Ivanishivili, leader of the coalition which won the parliamentary election last week. The Georgian Dream leader’s official Facebook page informs that the Secretary General congratulated him on winning the election.

He noted that Georgia has successfully passed a test of democracy.

They spoke about perspectives of deepening further relations among NATO and Georgia and expressed hope about Georgia’s NATO integration.