Putin and Saakashvili both talking about cooperation

Putin and Saakashvili both talking about cooperation 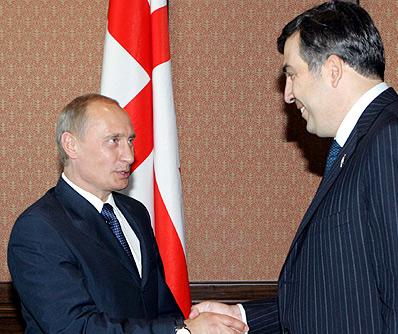 The days are gone when Vladimir Putin was talking about hanging Georgian leader Mikheil Saakashvili by his private parts.

TBILISI, DFWatch – The days are long gone when Georgian leader Mikheil Saakashvili spoke of Vladimir Putin’s height, while the Russian leader said he wanted to hang Saakashvili by his private parts.

Yesterday’s speeches by both shows that relations between them have eased, at least on a personal level.

The new thaw started February 28, when Saakashvili canceled visa requirements for all Russian citizens who want to come to Georgia, and Russia responded with the same action, adding that it would like to restore diplomatic relations with Georgia.

Russia’s president-elect Vladimir Putin Tuesday said he hopes there can be found a way out of the problems with Georgia.

But everything is not A-OK. Putin blames the problems on actions done by the Georgian government. If Georgia had acted in a different way in the conflicts with Abkhazia and South Ossetia [two breakaway republics currently occupied by Russia, ed.] the situation would have been different, Putin says.

He remembered that he has spoken with Georgian President Mikheil Saakashvili several times.

“We’ve talked with Mikhail Nikolaevich about [the ethnic conflicts], I told him many times, just do not bring it to bloodshed, it is necessary to negotiate with these people,” Ria Novosti quotes Putin saying. ‘He said, yes, yes, of course, we will do so.’ And what, and what has been done? All the contrary.”

He also remembered that there was agreement between the two countries about the Adjarian Autonomous republic that Moscow wouldn’t intervene in the events there, and he kept the promise. There also was agreement that there should be set up a counter-terrorism center, but that didn’t happen.

A journalists asked Putin: maybe what he is now saying will make Saakashvili nervous and he will start chewing his tie again, referring to a video of a nervous Saakashvili caught off guard by a camera during the war in August 2008.

“God be with him and with the tie. The man was nervous. Nothing scary, it happens, it can happeen to everyone. I am now talking without irony. But what I said, it’s true, I did not add a single word,” he said.

Yesterday during his visit to Azerbaijan the Georgian president spoke about Russia and Georgia’s common past and future.

“They are our partners. One day we will create a common space for peace and cooperation. We will do this with enthusiasm, because we cannot change the geography and cannot erase the history. We cannot do this and do not want to.This is our geography, common history. We have a common past and future to build together with Russia. I am sure and no one can change my mind that the name of this future will be EU and NATO. It doesn’t mean necessary severing relations with Russia. It shouldn’t mean this,” Saakashvili said in Azerbaijan.