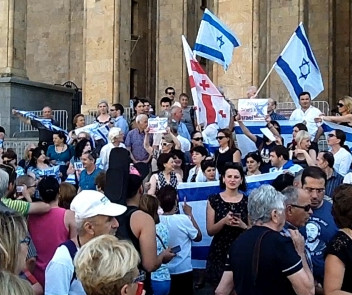 About 50 demonstrated in Tbilisi on Tuesday in support of Israel. (Interpressnews.)

TBILISI, DFWatch–A group of Georgians demonstrated in front of the old parliament in Tbilisi on Tuesday in support of Israel.

The rally was planned through Facebook and was joined by about 50 people. Representatives of the Jewish community in Georgia were present and thanked the organizers for their support.

Jamlet Khukhashvili, who is co-head of the commission to celebrate friendship between the Georgian and Israeli people, said that the Israeli army has never been aggressive and never fought against peaceful civilians. It is fighting against terrorists in Gaza, he said.

People brought posters, which read ‘Solidarity with Israel’ and ‘Israel we stand by you.’

A group of Israeli tourists joined the demonstration and sang songs.