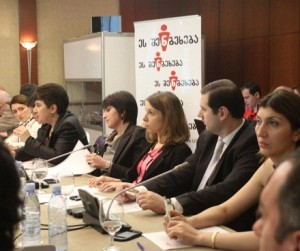 The campaign suggests legislative changes to give others than the ruling party somewhat more access to the media. Today, all national TV stations are strongly pro-government.

TBILISI, DFWatch – A pro-democracy campaign in Georgia Thursday presented their latest package of modifications to various aspects of the election system, as there are four months left until the parliamentary elections.

Among issues they presented to an audience of political parties, local and international organization representatives, was improving the procedure to count votes on election day, transparency in the election administration, regulate the usage of administrative reaction, providing equal access to the media for political parties during the election year, equal access to outdoors advertisement, as well as ‘must-carry’ and ‘must-offer’.

Parliament of Georgia in December adopted legislative changes for the election environment, after partly agreeing with part of the opposition and receiving recommendations from the Venice Commission and OSCE’s elections branch ODIHR. But the changes did not follow the recommendations fully.

The amendments were criticized by international and local organizations. In February, a campaign was started called This Affects You Too, with a goal of amending the legislation again.

Groups from the campaign held negotiations with lawmakers at parliament and finally achieved agreement, and at the end of April, parliament passed those changes.

But media and advocacy groups think there are still problems with the election related legislation, and especially in regards to media, which is the main focus of the current package of proposals.

Amendments for the election code are the following: in order to provide transparency of the election commission, the campaigners suggests that the Central Election Commission can have live broadcasts from its own sessions via the Internet.

The bill restricts the usage of administrative resources for campaigning purposes from June 1. There are a number of new regulations in this regards, like precise regulations for budget expenses, and widening the category of persons that can participate in the election campaign.

Lasha Tughushi, editor of the daily newspaper Rezonansi and co-author of the bill, Thursday presented that part of the bill which deals with political advertisements in the media during the election year, based on examples from countries in the West.

One of the main problems in regards of paid commercials, he says, is that the price of commercials in an election year is ten times more than usual.

“This means that the whole resource mainly runs to two channels and on the rest of the television stations runs a very small amount of money.”

Lasha Tughushi remembered an example in 2010, when there were local government elections in Georgia.

“Zero tetri was transferred to regional broadcasters from political advertisements then. You can make conclusions.”

That’s why group decided to regulated this sphere.

The bill suggests defining the price of paid political commercial per second, and that the price shouldn’t exceed the price of ordinary commercials at the same time last year.

Considering the fact that paid commercials aren’t placed in a majority of broadcasters, it causes another problem – placement of free political commercial puts those broadcasters in a difficult situation, Tughushi says.

“This will cause that financial resources will appear everywhere and it will cause interest of broadcasters to report political processes unbiased.”

The bill suggests definition of the covert political commercials; also regulations to place social, paid and free political commercials. It applies obligation on the National Communication Commission to review and react to media monitoring conducted by international and local organizations. Also there are rules to hold election debates and providing information on election processes.

The bill will make it obligatory for the Public Broadcaster to at least once a week hold political debates, and this will provide people with information on political subjects and help them make an informed choice.

But Gakheladze said it would be better that GPB held permanent debates during the last five days before elections.

As example he named Mayor elections, when GPB hold political debates during last two days before elections, because this is most active period and people’s interest is highest.

He gave another suggestion about paid and free commercials. He says that paid political advertisement should have limits: not more than 30 seconds and not less than 25 seconds. And these regulations should particularly be for Public Broadcaster. Because in the past there were disputes why certain parties had minute and half commercials, while the others only a few seconds.

The guests agreed to review the details at smaller meetings and it is possible to make small changes to the bill if necessary.

Tamar Kordzaia from Georgian Young Lawyer’s Association presented details about ‘must-carry’ and ‘must-offer’. The bill will make it obligatory for cable networks to carry broadcasters having general, community and public broadcaster licenses if they offer their signal for free, or they agree on a price.

On the other hand bill prohibits national broadcasters to switch off from the cable networks for certain period until the elections are over in the country.

The regulations seemed to be unclear to guests requesting to name examples to be more understandable.

Gia Nodia, a former education minister in Saakashvili’s government who is now a commentator, said he hopes parliament will not pass this bill. He argued that it is impossible to regulate everything by laws, and that trying to do so will only give the government more powers to control the media. The authors of the bill responded that it is oriented at the media’s independence and not the opposite.

Davit Usupashvili, hwo represents the opposition Georgian Dream coalition said he wouldn’t bet with Ghia Nodia whether parliament will adopt this bill or not.

“His hopes are probably more likely to be carried out than mine in the future,’ he said.

“Everyone should have the right to say nonsense and obligatory to listen to other one’s nonsense. Those changes towards media will lead us that we all will have opportunity to say ours nonsenses and will listen to others too,” he added.