Prisoner was to have murdered mother of Buta Robakidze

Prisoner was to have murdered mother of Buta Robakidze 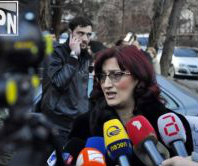 TBILISI, DFWatch–A prisoner serving time for drug related crime claims he was forced to carry out a murder in 2008, but the plan was called off.

The prisoner’s story was discovered by the Georgian ombudsman, who recommended that the case be investigated by the Prosecutor’s Office, which says it has launched an investigation.

In November, 2004 a police operation ended with Buta Robakidze being shot and killed, while four others he was driving with were charged with illegally carrying a weapon.

The Ombudsman wrote yesterday that the prisoner claims he was detained by the criminal police department employees Giorgi Khizanishvili and Giorgi Chanturia in July, 2008 and taken to the Criminal Police Department.

When there, he met Irakli Pirtskhalava and Kakha Legashvili, who threatened to put him in jail for drug related crime unless he killed the mother of Buta Robakidze, Ia Metreveli. He also had to give testimony against Zurab Vazagashvili, another person who was killed during the previous government during a police operation in 2006.

The prisoner says he had no other choice but to agree to cooperate. His orders were to carry out the murder in a shop during a robbery. He would be detained after that, but was promised to get advantageous conditions in prison, and would have access to drugs.

After that, the prisoner said he left Georgia for a while and returned after the August war in 2008, when Khizanishvili told him that there was no time for the deal and he had to wait for a while to ‘continue working.’ Then he left Georgia again, and when he returned the police detained him for drug crime and sentenced him to 10 years in jail.

The Prosecutor’s Office has launched an investigation on suspicion of preparation of premeditated murder under aggravating circumstances and exceeding official powers.