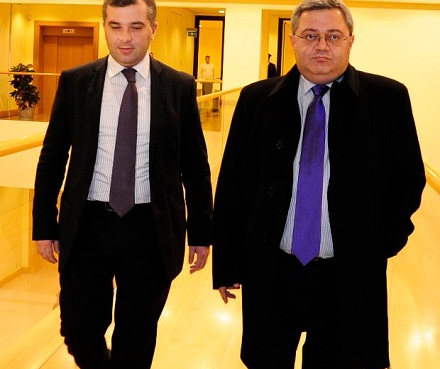 TBILISI, DFWatch–The two main political blocs in Georgia met Tuesday to try to agree on how to change the constitution, but without results.

Parliament Speaker Davit Usupashvili from the governing Georgian Dream coalition said he believes it is possible to bring positions closer, but didn’t want to go into specifics.

Member of parliament Davit Bakradze from President Saakashvili’s National Movement party said it is possible to make reasonable compromises for the good of the country, but he added that one cannot be overly optimistic.

“Everything depends on the ongoing events in the country and readiness of negotiations,” he added.

The Georgian Dream coalition is nine votes short of a constitutional majority.

February 8, a crowd of demonstrators and activists from Saakashvili’s party clashed outside the National Library, and the president had to move his annual state of the nation address to another venue.

The EU and the US have encouraged the two blocs to be constructive while they are forced to share power at least until the presidential election in October. While the police and the prosecutors are under the new government’s control, the president still has power over the secretary of the Security Council, the joint military staff and the regional governors, as well as the presidential guard.