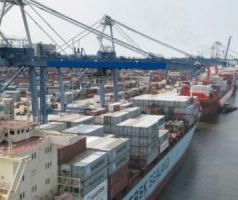 Poti is an important transit hub in South Caucasus, and lies on the eastern shore of the Black Sea. (IPN.)

TBILISI, DFWatch — In Poti, a city on Georgia’s Black Sea coast, the port is paralyzed by a strike.

The port is important not only because it connects South Caucasus to the outside world but also because it is an important transit hub for the flow of goods between Europe and Central Asia, as part of the Trans-Caucasian Corridor (TRACECA).

The strike comes as part of a wave of workers’ protests that spread across the country after the election results became known October 1.

For seven days, the majority of port workers in Poti have kept up their strike, demanding better working conditions and increased salary.

Local media report that negotiations with the port management have been unsuccessful. The latest meeting was held November 2, but workers left as sign of protest.

Striker are joined by workers who have been fired during the last months, saying they were dismissed without reason.

“One day, the company decided they do not need more workers and illegally fired us. Our demand is to restore our jobs and have normal working conditions,” TSpress quotes one of fired workers Revaz Sekhniashvili saying.

But the Georgian Labor Code allows employers to fire workers at any time without explanation.

Another demand is to be given life insurance.

Two weeks ago, workers at the port held warning rallies threatening that they would paralyze the port if their demands weren’t met.

Yesterday, Joseph Crowley, General Director of Poti Port, resigned. He told journalists that his leaving is not related to current events, but was planned.