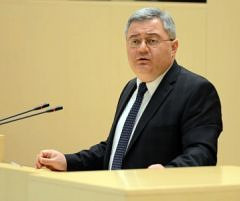 Speaker of Parliament Davit Usupashvili issued a statement in which he deems unacceptable when judge makes important decisions ‘in secrecy’, as it may influence the future of the country.

‘It is unacceptable for our country’s political life to be ruled by the Saakashvili–Khalvashi scenario’, he wrote referring to the two confronting sides. On one hand there, are United National Movement members and their former leader ex-President Mikheil Saakashvili, who was recently revealed to have been discussing a scenario of ‘bloodshed and revolution’ with former allies in a number of wiretap conversations published last week. On the other hand, there is Kibar Khalvashi, former owner of Rustavi 2 who went to court in order to claim the company back. UNM members and current managers claim, that he is just a tool in hands of authorities vigorously attempting to mute the opposition channel.

‘It is unacceptable to involve courts in fight with no rules’, Speaker of Parliament wrote.

A short statement made by Prime Minister Irakli Gharibashvili is a continuation of his previous rhetoric that the government shouldn’t interfere into a private case of a private company in court and that a private trial cannot by politically motivated. He spoke about the necessity of an open and transparent process, while the prerogative of an independent court is to make unbiased decisions.

The US Ambassador to Georgia responded to the developments at Rustavi 2 by expressing ‘deep concern’ over late Thursday night developments.

‘Attempts to change the management of the station, in advance of the appeal process, have profound political implications. In a democratic society, critical opinions should be encouraged, not silenced.’

On Friday, up to twenty local nongovernment organizations issued a common statement explaining how the decision of Judge Tamaz Urtmelidze had no legal grounds. They claim that the court ignored the recent decision of the Constitutional Court to suspend the enforcement of the Norm of the Civil Procedure Code of Georgia which determines one of the grounds for immediate enforcement of the ruling of the court of the first instance, in this case — the Tbilisi City Court.

The representatives of OSGF believe that the situation raises a danger of escalation.

‘The decision of the court, in a wider context, raises strong doubts about politicisation of legal institutes’, the statement reads. It also says that the trial goes beyond private dispute, as concerns the issues of freedom of expression and independence of media.

Public Defender Ucha Nanuashvili believes that the company’s right to freedom of speech and expression is being abused.

He believes that the decision which was made on 5 November puts into question the objectivity of the particular judge, but also reveals serious problems in the court itself.