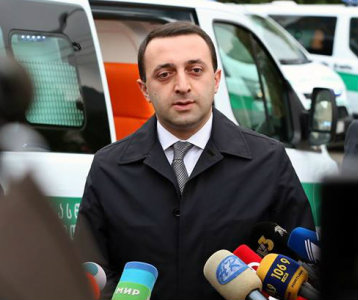 TBILISI, DFWatch–After sacking and reprimanding his once ally, Prime Minister Garibashvili says if Alasania’s party goes into opposition, this will make the country’s democracy even stronger.

Alasania on his part says he thinks the PM has lost face.

Garibashvili still assumes that when the situation has calmed down, Alasania’s Free Democrats will have a reasonable and constructive relationship with the government, as there are ‘good and decent people’ in the party, but he was hoping that it would remain in the coalition.

“Our country deserves a political opposition which is ready for constructive cooperation with the government so that the country manages to move forward and continue the Euro-Atlantic integration,” he said after meeting with foreign diplomats in Georgia.

Both Alasania and Garibashvili believe that the other’s statements are harmful to the country’s foreign policy course of seeking closer integration with Europe, which the PM repeated on Thursday.

But current events won’t have any influence over Georgia’s foreign affairs, Garibashvili insisted, and tried to reassure diplomats that the government’s policy hasn’t changed and is not going to change.

Since the pro-western Alasania, his ally the former minister of Euro Atlantic integration, and the foreign minister are no longer in government, some have speculated that pro-Russian forces are attempting to change the country’s foreign policy course, but those who remain on their posts maintain that the government remains committed to a western course.

The PM promised to name new ministers in a few days.

Irakli Alasania earlier responded to the PM, who yesterday called him ‘unwise and ambitious’, by saying that Garibashvili has ‘lost face’ and he is not planning to reply in the same way because he respects the country’s institutions. Alasania called on the PM not to repeat the same thing.

“A righteous man doesn’t lose face,” he said, adding that he still thinks the period together with the government and colleagues was precious, despite the politics of it, and ‘steps by the Prosecutor’s Office’ made their ways part.

“This is not correct toward society, to me and of course to his colleagues, who, I am sure, won’t consider his statement today positive,” he added.

Later, Alasania told journalists that he doesn’t exclude that the investigation ‘might reach him’ as well.

“On the contrary, I am sure I am the target of all this. So I want everyone to know that those innocent guys must be released and if they have any questions they can contact me,” he told journalists.

Meanwhile, Speaker of Parliament Davit Usupashvili assessed events by saying that everyone rushed after the investigation of Defense Ministry officials and the speed with which this happened resulted in the political turbulence.

He thinks all should be done to protect the Prosecutor’s Office from political influence.

“It has been a particular important lesson which we should all reflect on and improve our work,” he said.