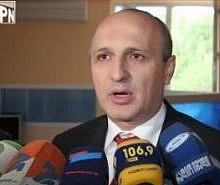 TBILISI, DFWatch — The party of President Mikheil Saakashvili has started a campaign to gather signatures in support of his initiatives about tax amnesty and decriminalization of financial crime.

The president presented his new initiatives to the government a few days ago, arguing that it is necessary in order to attract investments, which have fallen lately. He also suggests decriminalizing economic crime and prohibiting custodial punishments for economic crimes.

The former opposition made a similar proposal while Saakashvili held government power, but the proposal was not picked up on by the National Movement, which then had a dominating position with a constitutional majority in parliament.

In addition, there are claims that the previous government had made illegal deals with business people, who in return were exempted from paying taxes. Many suspect that businessmen who were close to Saakashvili’s government have a large tax debt.

The Prosecutor’s Office has investigated such deals, which makes some speculate that the president’s reason for his initiative is to stop these cases from being further investigated.

Vano Merabishvili, Secretary General of the National Movement and former Interior Minister in the previous government, on Tuesday told Rustavi 2 that there is an alarming situation in Georgia’s economy right now. He said if there had been the same kind of situation during their government, the whole government apparatus would be in emergency mode.

He said data from January shows that the economy has not improved compared to the last three months.

“Data for economic growth, economic activity, export and import, deposits and credits have severely worsened after the new government came,” Merabishvili said, without specifying the source of his information. The Ivanishvili government accuses him of making incorrect claims.

The National Movement demands that the new government accepts the president’s initiatives, and has starterd gathering signatures in support of this demand.