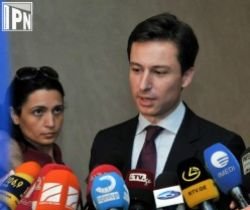 TBILISI, DFWatch–The leader of Christian Democrats plans to sue against Prime Minister Bidzina Ivanishvili for defamation and will demand one billion lari (USD 600 million) in compensation.

Ivanishvili Thursday met with newspapers editors to talk about the upcoming presidential election on October 27.

“Shalva Natelashvili has one or two percent of support. For twenty years he has lied to people and he still has some support,” he continued, “He has nearly become a clown and today still has 1 or 2 percent.”

Natelashvili doesn’t have an ideology, he continued.

“He still promises to compensate deposits that people lost in Soviet times and he tries to make people live on such lies,” Ivanishvili said, adding that few people support him and this is good. “Some time he had 20-30 percent support.”

Moving on to speak about Giorgi Targamadze, he called him a ‘prime example of a traitor’.

“This man always had opinions that were against the state. He is like a prime example of a traitor in my view. He has always been standing where the country didn’t need him,” Ivanishvili said, adding that Targamadze also has one or two percent support.

“I understand that many do not have the skills to make the right analysis and they are misleading society.”

When it came to Nino Burjanadze, leader of the Democratic Movement, the PM said that in every poll, Bakradze from the National Movement party has slightly more support than her.

“If there will be the second round let them have Bakradze and Bujanadze.”

Targamadze said at a press conference the same day that he plans to take Ivanishvili to court for defamation next week.

“I decided to go to court where they will explain to Bidzina Ivanishvili the meaning of several Georgian words – what does state mean, what does traitor mean. He will have to be responsible and apologize, and I will require publicly for me and my family a certain amount of money. My dignity is expensive,” he said, adding that he will require one billion lari in compensation.

Targamadze also said that he is ready to spend this money to accomplish one of the promises that Ivanishvili hasn’t fulfilled – to develop hydroelectric power stations and reducing electricity prices.

Shalva Natelashvili from the Labor Party called on Ivanishvili to face him in live TV debates.

“I don’t want to respond with the same words,” Pirveli Radio quoted him saying on Thursday. “I want people to learn who was financing the Saakashvilis, Merabisvhilis, Shevardnadze, Burjanadze, who strengthened and armed special units to disperse us, who cooperated with Shevradnadze’s, Saakashvili’s and Merabishvili’s mafia in the economy and who didn’t fulfill election promises.”