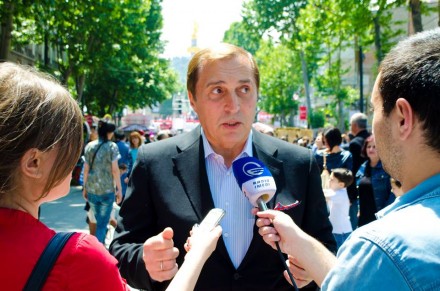 Tbilisi, DFWatch – The newly former political party led by Paata Burchuladze, famous operatic bass, held a rally at Tbilisi central sports arena on Saturday, announcing a motley bunch of people with different backgrounds as leading figures at the party and vowing to come to the power.

Among the nominees for a leading role at The State for People party there are two journalists, Merab Metreveli and Lasha Dvalishvili (the latter is a sports journalist), a political commentator, Khatuna Lagazidze, a medical radiologist and former chair of Tbilisi City Council, Lado Kakhadze, and several other people less known to the public.

Paata Burchuladze, though without any significant political experience, is believed as having a significant chance to enter the parliament after the elections on Oct. 8, as according to recent opinion polls, many Georgians are being disappointed with current politicians.

In his address to the gathering Paata Burchuladze vowed to come to power, adding that this in ‘inevitable’.