One more construction worker dies in Tbilisi, the second in two days

One more construction worker dies in Tbilisi, the second in two days 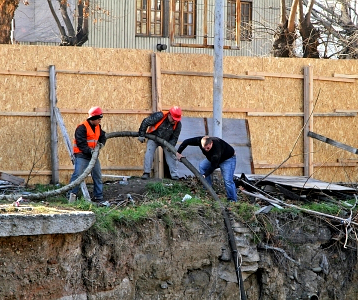 TBILISI, DFWatch–One more construction worker died in Tbilisi on Thursday; the second fatality at a construction site in two days.

The accident happened as pipes were being unloaded from a truck on Khizanishvili Street in the northern Mukhiani district of the capital, the Ministry of Internal Affairs (MIA) said.

The online version of a Georgian magazine reported that the worker had felt a pain in the heart after unloading the pipes, and that ambulance crew were unable to save his life.

The director of a company which is constructing a multi-storey building on Guramishvili Street near Sarajishvili metro told Liberali that the deceased was working for their subcontractor, which was hired to lay the foundations of the building.

Co-workers said the man had complained about feeling ill that morning, but continued working.

An investigation has begun on the basis of article 240 of the Criminal Code about violation of safety rules at  a construction site.

The day before, a 26-year-old construction worker fell from a building on Jikia Street, also in Tbilisi. He died later the same day at the hospital.

Liberali reported that his name was Temur Gurgenashvili, and that he was married just a few days prior to his death.