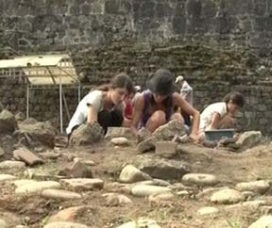 The oldest basilica church ever discovered in Georgia dates from the fifth or sixth century A.D. (IPN.)

The ruins cover an area 40 meter long and 16 meter wide, and were found in Kakheti, on the right bank of River Duruji, close to the town Kvareli.

During an archeological survey in 2010, archeologists found the ruins of a basilica, and plans were made to start excavation in 2012.

The church contains five pairs of a cross type columns. Specialists say there must have been a relatively large building on this area in the fifth or sixth century A.D.

The recently unearthed ruins of a church are part of a monastery complex which also contained an ancient settlement. Excavation work revealed a stone-box type burial place, which may have belonged to clerics.

Archeologists explain that this is the largest basilica ever discovered in Georgia, larger than Bolnisi Sioni Cathedral, which is also a basilica, and was built in the fifth century A.D.

The discovery has been preliminarily dated to the fifth or sisxth century A.D., but a more precise date will be determinged after the ruins have been fully excavated and cleaned.

The National Agency for Cultural Heritage has announced a tender to conduct archeological work at the site of the new discovery. A team of archeologists from Ilia State University were the only ones interested, and they are the ones now working at the site. The team has been paid 39 900 lari for the job, which should be finished by the end of 2012.