Okruashvili returned to Georgia to clear his name

Okruashvili returned to Georgia to clear his name 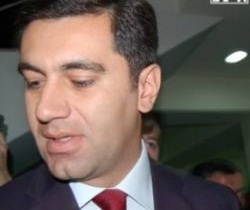 TBILISI, DFWatch — A former Defense Minister who has lived the last years as a political refugee in France this morning returned to Georgia and was detained on arrival. He was brought to Gldani’s No 8 prison in Tbilisi, which is one of the most crowded prisons in Georgia, where most of the torture cases have taken place.

The Georgian Party, which was co-founded by Irakli Okruashvili, informs that today at 16:00, Tbilisi City Court reviews the criminal case against him. Okruashvili’s reason for returning now, was to attend this hearing. Party spokespersons say he knows well that he will have to remain in detention but will continue fight for justice in detention.

Justice Minister Tea Tsulukiani later today informed that the former government official was moved to Gldani Prison. She learned yesterday that he approached the border together with his uncle.

“In my opinion he returned to prove his innocence inside the country, to find justice.”

She said German and France courts discussed this issue and granted him status as refugee.

“I agree with the position that Okruashvili was a political refugee of the National Movement government [party of President Saakashvili, ed.], but this doesn’t mean that he is innocent of all accusation. It needs investigation,” she said, adding that there are several criminal charges.

There are three criminal cases against him, according to an official statement by the Interior Ministry. He was detained at the airport, after flying in from Istanbul.

“I had two goals in the last years of my life – to get rid of Misha and to get back home,” Irakli Okruashvili said at the airport, adding that no one will get him out of Georgia now.

“Getting rid of Misha is partly finished. Even though it was done by others, I also contributed a little. several hours makes me far from home. Several hours get me far from home, but no matter where I am, I am in Georgia. I may categorically demand to be there, where this bastard Akhalaia is kept. This is humor of course. We will see the rest.”

He said the new government has enough time to demand answers from previous government officials of what they did.

His lawyers, who today 13:00 held a press conference, state that Okruashvili will remain in detention no matter what is decided at today’s hearing and he knew it when he came back to Georgia.

In 2007 Okruashvili was detained for abusing powers and extortion. He was criticized by the government for his role during the anti-Saakashvili protests at the time. March 28, 2008, a court sentenced him to eleven years in jail. Until now, he has lived in France, which has given him political asylum.

In fall 2010, the controversial politician was among the founders of the Georgian Party. Six months later, in May 2011, he promised to return to Georgia at the peak of a series of anti-Saakashvili protests, but cancelled in the last minute.