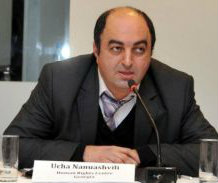 TBILISI, DFWatch–The ombudsman in Georgia on Monday published a report which criticizes the authorities for holding back information and not properly investigating a border shooting in 2012.

When the several days long standoff ended on the border with Russia in late August two years ago, 14 people were reported to have died; 11 rebels and three of the Georgian forces.

But this number of casualties was wrong, according to the new report. Seven rebels died, which brings the total number of dead down to ten.

Another mistake in the Saakashvili government’s statements was that the rebel group had come across the border from Russia and entered Georgia. This was wrong, the ombudsman’s researchers state.

Among the dead rebels, three were local Georgians from nearby Pankisi Gorge. This is one of the reasons the Saakashvili government’s claim that the rebels had come from Russia and entered into Georgia was met with disbelief. Another reason is that the only man detained after the incident, Ahmed Chatayev, said that the fighters had tried to enter Russia from Georgian territory.

Against a background of complete lack of information forthcoming from the government, the ombudsman put together his own committee in October, 2013, and tasked it with investigating the incident, and now its findings are available.

The report concludes that several types of information given by official sources has not been confirmed. Ombudsman Ucha Nanuashvili now asks parliament to start investigating the shooting incident all over again.

He says the official information which claimed that a group of terrorists entered the country from North Caucasus is not correct. He also says that potential evidence has still not been gathered from the place where the shooting took place, no autopsy was conducted on bodies of the victims and the number of victims is seven and not eleven, as the government claimed.

Nanuashvili said on Monday that there is evidence which proves that the official version of events is wrong.

Some findings were made when the committee, called a public council, went on a field trip to Lopota Valley near the village Lapankuri, close to the Georgia-Dagestan border, where the shooting took place.

Among their findings is that five of the seven dead rebels – Aslan Margoshvili, Dukvakha Doshuev, Bahadin Baghakashvili, Salam Zaurbekov and Jabrail Khashiev – were not officially in Georgia during the shooting, on August 28-29, 2012. This contradicts what was reported by officials at the time, according to the new report.

August 29, the Interior Ministry reported that a special operation was conducted in Lopota Valley, as result of which two employees of the Interior Ministry died: Archil Chokheli and Solomon Tsiklauri. Also military doctor Vladimer Khvedelidze was killed. According to the same report, 11 members of the rebels group were killed.

But the ombudsman’s report says that the Interior Ministry informed the public council in the period August ot October, 2014, that in fact, seven members of the rebel group died as a result of the special operation.

Nanuashvili said he assumes that the result of the study indicates that there may have been improper and disproportionate usage of power during the special operation by law enforcement bodies.

April 16, 2013, Data Akhalaia, former head of the Interior Ministry’s Constitution Security Department (Kudi), and brother of former Defense Minister Bacho Akhalaia, wrote on his Facebook page that Vano Merabishvili carried out a special operation of Lapankuri through Gia Lortkipanidze against Bacho Akhalaia. There had been rumors about a disagreement between the Akhalaias and Merabishvili before the operation, which Akhalaia confirmed in his statement.

“With full responsibility I say and I have evidence that adventure of Lapankuri was planned against my brother Bacho Akhalaia by Vano Merabishvili, implementing it through Gia Lortkipanidze and sacrificed the lives of our fighters, while it brought tension to our relations with our Kist brothers and endangered the country’s security and international image,” he wrote.