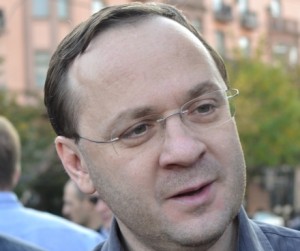 Giorgi Tsagareishvili of the Free Democrats criticizes the new ban on cameras inside parliament.

TBILISI, DFWatch – Journalists in Georgia will no longer be allowed to bring cameras into the session hall of the Parliament building.

The new rules will be regulated by parliament’s own rules.

Journalists are compensated with a promised new media center when parliament moves to Kutaisi sometime this fall. There, journalists can follow debates via eight cameras installed in the hall and then they will also be able to download material necessary for them.

The parliamentary opposition objects that the majority shouldn’t decide what rules the media will follow and warns that freedom of speech may be threatened.

Late last year, a TV camera caught footage of parliamentarians for the ruling National Movement Party pushing the voting buttons of absent colleagues during voting, in violation of the rules.

“It is interesting why it became a problem for parliament that journalists disturb MPs with their TV cameras and why doesn’t the other problems disturb the parliamentary rules and generally the parliamentarism,” says Giorgi Tsagareishvili, representative of the Free Democrats Party and leader of the faction Unity for Justice.

“The government talks about parliament’s rules as the regulation for the National Movement and such an approach once more proves that the governmental team doesn’t even want to have consultations about the rules with the political forces present in parliament,” he says.

Tsagareishvili asks for people to contact the faction Unity for Justice and get involved in the process of drawing up the new rules for parliament’s functioning.

First Vice Speaker of Parliament Mikheil Machavariani promises that journalists won’t have their movements restricted in the new parliament building in Kutaisi. Work conditions will be more comfortable for journalists, he says.

He says, a great deal of work is going on to accommodate for all journalists to receive the video feed not only from the plenary sessions but also from the committees.

Machavariani says no information or topic will be kept away from journalists, but there will be places in the new parliament, where journalists won’t be able to place the cameras; there will be one press center, where a video feed will be available from all committee sessions. They will no more have to ‘run from one committee to another’, but may if they want.

He promises that all the information will be more accessible and as easy to obtain for journalists as it is today. As for moving into the new parliament building, Machavariani personally guarantees that they won’t have any restrictions in this regard.

According to the new amendments to the constitution, parliament will be moved to Kutaisi after this year’s parliamentary election, a small city in western Georgia, where a parliament building is being built.