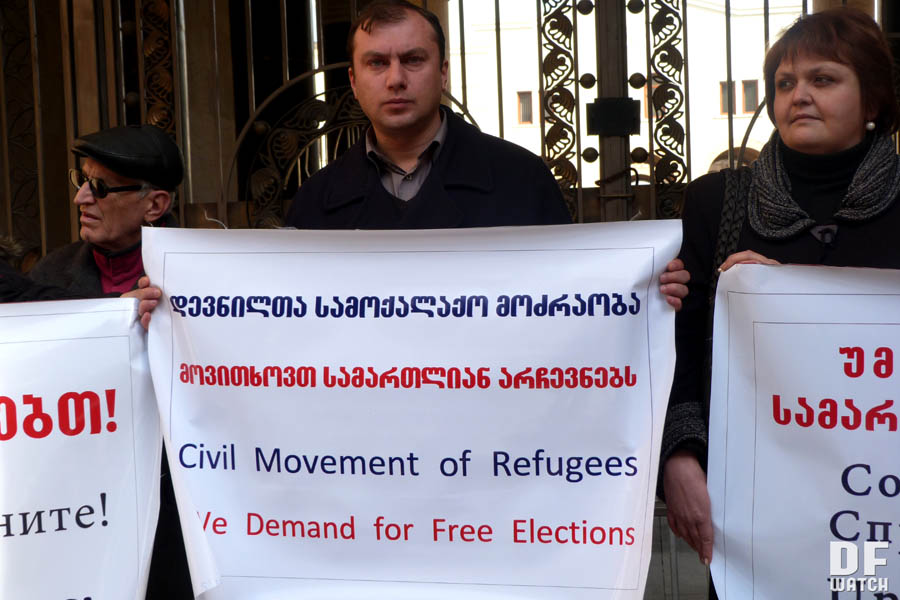 Groups say the new wide powers may be applied arbitrarily, and thereby create a chilling effect ahead of the parliamentary election in October. (Photo: Mari Nikuradze.)

TBILISI, DFWatch – The loud sound of a horn and whistles was heard outside parliament in Tbilisi today, as activists and rights groups protested against a new set of rules that they say threaten basic freedoms.

They came there not only to show how strongly opposed they are to the rules, but also to deliver a bill they have made themselves to amend the law about political unions of citizens in a way that avoids violating political rights.

The bill was also sent to the Council of Europe’s Venice Commission, which has been giving Georgia advice during its efforts to overhaul the whole election system.

In December, the ruling National Movement party pushed through a set of changes which gave the Chamber of Control power to restrict the finances of any group, company or individual who is directly or indirectly connected to a political party. No evidence is required to prove political connections, and the body does not need to go through a court before imposing sanctions.

Two organizations were targeted in early February. One of them provided election observers during two disputed elections in 2008.

The ruling party of president Mikheil Saakashvili argues that the new wide powers are needed to create more transparency in the political process. But Transparency International, an authority within the field, is opposed to the rules.

“The aims of the law, which the ruling party talks about, the transparency of the party financing is completely acceptable for us, but we, the non-governmental sector, have our own views regarding this issue.” Eka Gigauri, head of Transparency International Georgia said adding that the NGOs hope that the parliament will share their proposal regarding the law about the political union of the citizens. 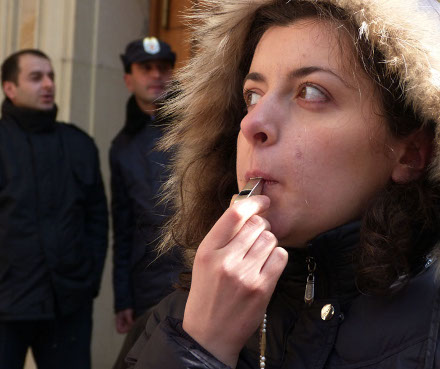 Parliamentarians were handed 438 signatures against the law and a proposal for how to change it which was also sent to the Council of Europe. (Photo: Mari Nikuradze.)

“It affects you too” is the name of a campaign launched by TI and other groups who might be next in line of the law remains unchanged. They warn that even though the law is not applied over the board to every group, it will create a chilling effect. Watchdog organizations will be afraid of falling out with authorities, and see their funding cut off.

Campaigners also delivered a list of 438 signatures to parliament along with their proposed bill.

The petition says that the new law grants ‘undefined and unconstitutional authority’ to the Georgian Chamber of Control.

“The law is unclear and gives room for interpretation, it’s unclear to whom it applies, which should be specified,” Eka Popkhadze, the executive director of Georgian young Lawyers Association says.

“The law is anti-constitutional, violates freedom of speech, freedom of assembly and property rights,” she adds.

If a person, for instance an entrepreneur, supports some political party, the Chamber may consider him a person connected to a political party and freeze his property, without even going through a court.

“Think it through well before you say or do something. As a minimum, you may have some problems and maximum you can be arrested,” according to a campaign brief being circulated.