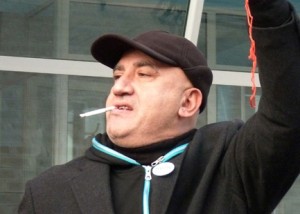 Mamuka Glonti, former producer at Maestro TV, took the initiative to a media protection group based on the principle "all for one, one for all". (Photo: Mari Nikuradze.)

TBILISI, DFWatch – Representatives of Georgian media gathered today at the office of Obiektivi, an internet based radio and television outfit, to prepare the draft of a memorandum for a new media association, which will be called Solidarity for Freedom of the Media.

The new association is the initiative of Mamuka Glonti, the co-founder of the independent television Maestro, which is in a difficult situation these days, after its head Erosi Kitsmarishvili broke into the main studio building on November 30, forced the journalists to leave, and is still in control of the premises.

The current stand-off at Maestro is one motivating factor. Another one is what newspaper workers are calling an active campaign by the government to destroy their distribution system. This is about a project by Tbilisi City Hall to auction off locations for kiosks in Tbilisi. Many of these locations are at places where there until recently used to be newspaper kiosks. The old kiosks have been torn down during the last month.

For these and other reasons, Mamuka Glonti took the initiative to set up the new association to protect the rights of journalists and be a vehicle for a joint defense against attacks on the media.

Representatives of the media will be invited to sign a memorandum until February 1. The memorandum will be published on Monday. After signing, some media units will set up a non-governmental organization which will work out rules and begin to work with the challenges at hand.

According to the draft of the memorandum, an attack on one media unit will be perceived as an attack on the others. The organization will protect the rights of its members, but non-member media outlets will also be able to join the organization later, following agreement among members. All the members will have the right to veto decisions about accepting new media units as members, Mamuka Glonti said today.

“An organizational committee will be set up, which will make statements in the name of all the member organizations, this way it will be much easier to reach the international community, officials of Europe and the US, when the organization requests meeting with them, instead of a small outlet or newspaper,” Glonti said.

“This NGO will act to protect the interests of media units which may not be a member of our unit, but some legal or individual person will appeal to us with a request to protect them,” the draft of the memorandum says.

In case of harassment of media, member organizations take the responsibility to act together in the country as well as on the international scene.

There are nearly fifteen media organizations willing to join the new organization, according to Dimitry Tikaradze, editor of the newspaper Alia.