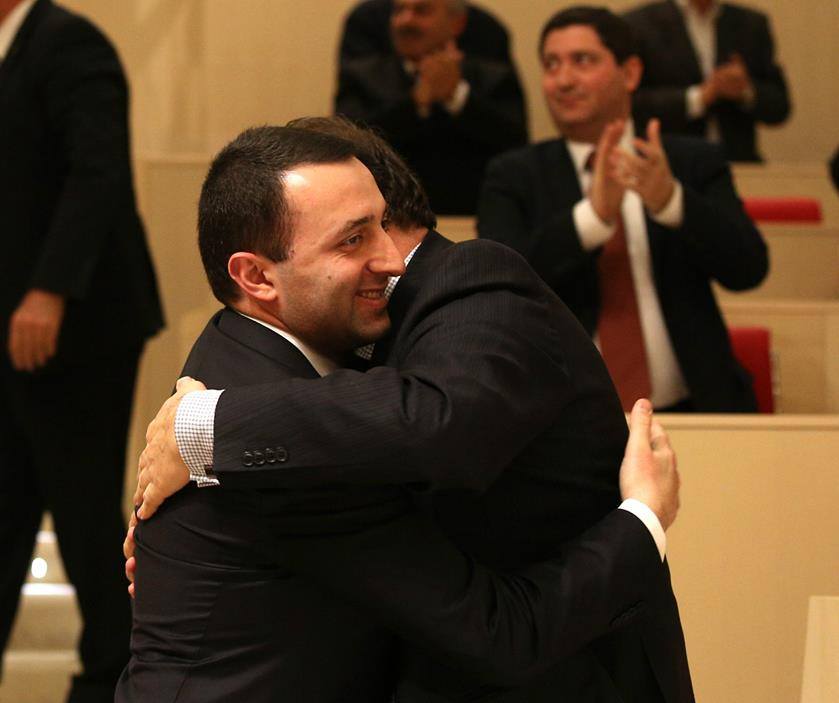 The new president also has been asked to sign a document by which parliament declares its trust in the new government and prime minister.

“I congratulate Prime Minister Irakli Gharibashvili and each member of Georgia’s new government for the great trust that parliament declared in them,” the president writes. “I wish success for the new executive group on the way toward the country’s development and the welfare of every citizen.”

On Wednesday, 93 members of parliament voted for the government and its new program at a special session. 19 MPs voted against.

Three days after the new president was sworn in, parliament declared trust in the new government. This means that billionaire businessman Bidzina Ivanishvili, who went into politics in late 2011, is no longer prime minister. Irakli Gharibashvili replaced him and a former employee of the Interior Ministry, Alexnadre Chikaidze, replaced Gharibashvili as interior minister.

The other ministers stayed on in the posts.

“Justice will finally be established, and people who were deprived of their property, harassed, pressured, we will apologize to specific people and not generally,” the speaker of parliament said on Wednesday.

He spoke about the priorities in the new government’s program and said that every promise must be fulfilled.

Before the declaration of trust, there was a debate between the minister candidates and MPs, which was completely different from what was on Tuesday, when Irakli Gharibashvili met with the parliamentary opposition. This meeting was transformed into accusations and ironic remarks.

On Wednesday, UNM members chose a different tactic and without any criticism they asked specific questions about the new government’s program, which was presented to MPs in parliament.

Majority of questions concerned the economy and major challenges of macroeconomic stability; which of legislative changes government plans to implement in order to improve investment climate; which of the state assets will the government privatize and how much does the government plan to get from privatization in the next few years; as well as what Georgia’s comparative advantage will be in the regional and global economy.

In his answers, Gharbiashvili focused on the mistakes of the National Movement, but he didn’t try to make jokes like he did on Tuesday.

UNM members implied that after the upcoming summit of EU’s Eastern Partnership in Vilnius, Russia will probably increase its pressure on Georgia, as this was what happened to Ukraine. They asked how the government will deal with this challenge.

PM said he doesn’t see any risks, because ‘Ukraine and Moldova are way more dependent on Russia than Georgia is.’

“I must remind you that it would be better if you would have been critical to your party in its time, when you sold many strategic assets to Russian companies,” he said, adding that the new government is not making any changes in its foreign policy and the country still has a declared course toward EU and NATO.