NATO may accept Georgia as member if Russia annexes Crimea

NATO may accept Georgia as member if Russia annexes Crimea 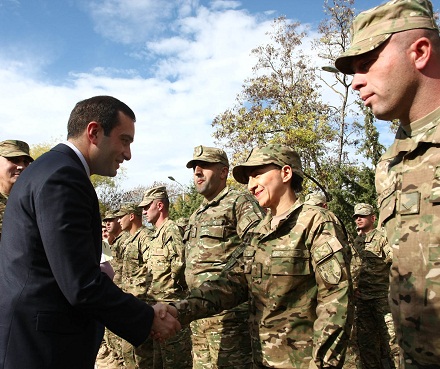 TBILISI, DFWatch–Georgia may move one step closer to joining NATO as a result of the Ukraine crisis.

The paper based its report on sources both in the NATO headquarters in Brussels and US Department of State.

The article states that Georgia might be granted a MAP in the fall during the NATO summit in Wales, but the final decision is dependent on the outcome of the Crimea crisis.

A government member in Georgia accounced on Tuesday that US Secretary of State John Kerry is to visit Tbilisi by the end of spring.

“According to our information, we know for sure that the US Secretary of State will come to Georgia,” Alexi Petriashvili, Minister of Euro and Euro-Atlantic Integration, said to journalists, and added that the exact date of the visit is not yet set.

John Kerry met the Georgian Prime Minister in the end of February along with president Barak Obama. After the meeting Kerry first mentioned possible visit to Georgia.

The meeting with the US president had not been scheduled before and came as a surprise, though Georgian Foreign Minister Maia Panjikidze said her administration had advance knowledge about the meeting.

Before the Ukraine crisis, there were no indications that Georgia would get a MAP, the last step before joining, and if the Alliance decides to put Georgia on the track to membership, it will be seen in light of the current standoff between Russia and the West following the violent overthrow of President Yanukovich and Russia’s alleged annexation of Crimea.

In a statement condemning Russian actions in Crimea, the Georgian parliament recalled the brief war Georgia fought with Russia in 2008, after which Russia recognized the independence of two Georgian breakaway regions, Abkhazia and South Ossetia, and stationed its troops there.

The 2008 South Ossetia war followed just months after the Bucharest decision, in which NATO promised Georgia membership some time in the future, stopping short of offering the country a MAP.

Geogia has looked for membership in NATO since the presidency of Eduard Shevardnadze in the early 2000s and efforts intensified after the Rose Revolution in 2003 under President Saakashvili, but prospects became more uncertain after the 2008 war.